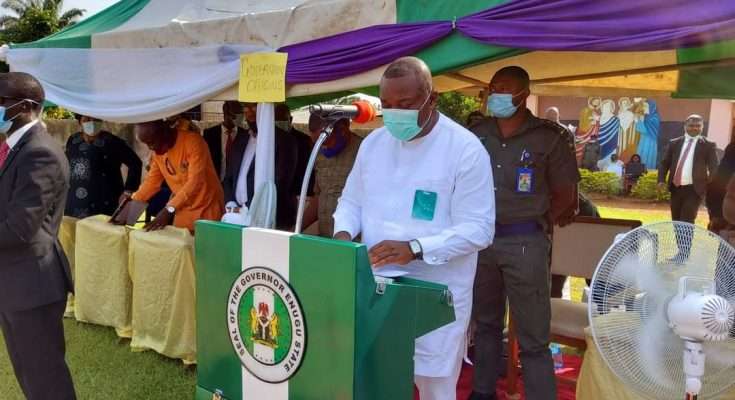 Governor Ifeanyi Ugwuanyi of Enugu State, on Monday, joined the Catholic faithful and families of the deceased pupils of Presentation Nursery and Primary School, Awgu, and other victims who lost their lives in a recent fatal road accident in Awgu Local Government Area of the state, to celebrate a Requiem Mass for them at the school premises, in Awgu town. 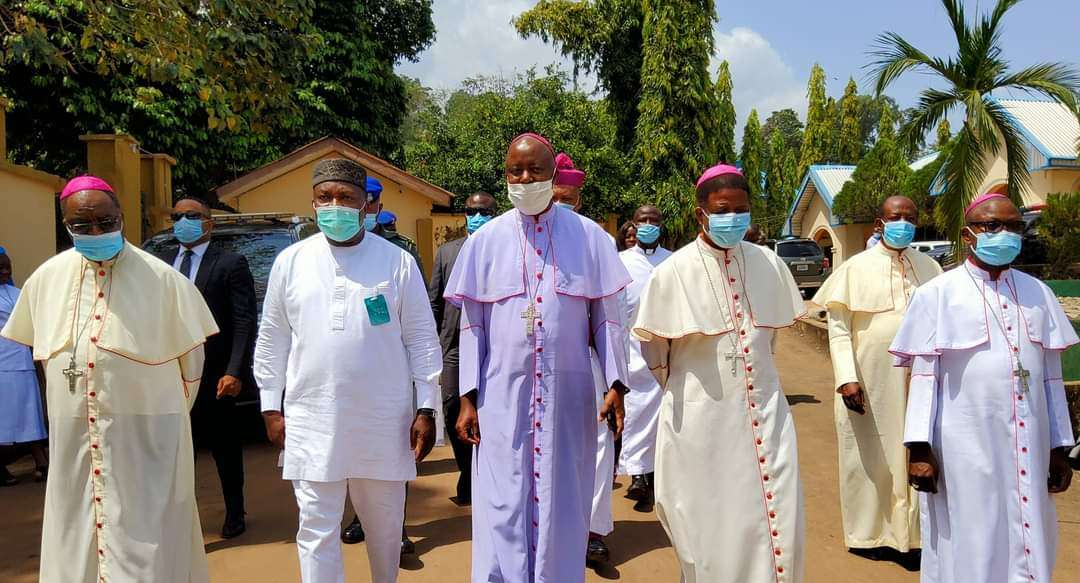 Gov. Ugwuanyi who described the eight pupils as “angles” bade farewell to them, their late teacher, Emmanuella Chukwugbo and the school bus driver, Chukwu Basil, as well as other victims.

The governor said that his administration was saddened, devastated and overwhelmed with grief by “the eventual realisation that we had lost eight young innocent school children, one teacher and the school bus driver to this tragedy”.

Laden with grief, the governor lamented: “Our children; our angels; had gone too soon and too suddenly; for no fault of their own.

“They were too innocent to have offended anyone; too young to have known sin; they only attended the day’s school; to acquire knowledge and high moral values; Yes, they were on their way home; to unite, as usual, with their beloved parents and siblings; a journey home that was never completed; what a tragedy!

According to him, “As Christians, we submit to the will of the most High God, who alone, knows why it happened. We accept our faith and find consolation in the conviction that our deceased angels are early arrivals in heaven; already seated in the midst of the heavenly host, praising God and glorifying his name”.

Disclosing that his administration, on the heels of the tragedy, had visited the recuperating survivors in the hospitals, Gov. Ugwuanyi extended “our condolences to the families of the deceased and our solidarity to the Catholic Diocese of Awgu” and prayed for divine healing and quick recovery of the injured as well as the fortitude for the families of the departed souls to bear the painful losses.

While sympathising with the management of the school, Gov. Ugwuanyi donated a brand new 18-seater bus to the school and promised to erect a monument at the scene of the accident to immortalise the school children.

The governor thanked all those who toiled to save the accident victims and reduce casualty such as “the Bishop of Awgu Catholic Diocese, the Federal Road Safety Corps, Enugu State Command, Ministries of Transport and Health, Enugu State, Awgu Local Government Council Chairman and the attending health care workers in the hospitals, volunteers, men and women of good will” and thereafter shared a touching true-life story of Horatio Spafford (It is well with my soul) “to console us in this difficult period”.

Earlier in his sermon, the Catholic Bishop of Awgu Diocese, Most Rev. John Okoye consoled the families of the victims and urged them to take solace in the scriptures and “in our Lord Jesus Christ”.

He therefore appreciated Gov. Ugwuanyi for his administration’s empathy, support and solidarity since the tragedy, adding that “the governor did not only call to console us that fateful day; he sent his deputy to us the next day and as soon as he concluded his meeting with other South East leaders, on Friday, the governor physically made his way to the Teaching Hospital to empathise with the survivors and paid their medical bills.