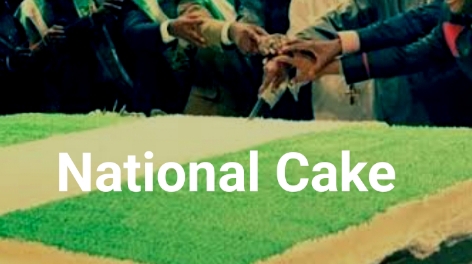 National Cake: Sharers Sharing Formula And The Rest Of Us

1999 was the year hope, like a collosus, bestrode our political landscape. The people were resilient in their push to oust the military until they were forcefully pushed out of power and democracy was enthroned!

Nothing other than corruption had defined our nation since the military incursions of 1966. They taught Nigerians how to steal and cheat. They left for the barracks (or did they) but left with us, the hydra headed monster of corruption!

Every administration had its anointed priest and Sharer in Chief! OBJ had his, in his Senior Special Assistant on Special Duties. His duties were indeed special, from cargo handling to recommendations for appointments.

He was like the defacto Mustapa of Abacha days. He grew so powerful in power and pay that a Governor of his state was successfully abducted for him without any consequences!

16 years up the steep, the walk to national development was slow paced. Fed up with this crawling, Nigerians were eager to run up for a pleasurable descent.

This necessitated the need for a CHANGE of leadership and government. The Change mantra of APC therefore resonated with the people. The mood was that of partners in progress! And the electorates fell for it!

It was time to turn our back on corruption and embrace integrity going forward. Both the APC swore under oath to lead with President Muhammadu Buhari.

Tinubu, the national leader of APC beemed with smile as Buhari made the vision statement of his administration; “I am for everybody and I am for nobody”.

Plagiarised as the statement was, nothing captures the intention of a confused leadership that will be neither here nor there! He indeed championed policies that were for everybody in the Sahel but ended up of no benefits to nobody in Nigeria except those that have the DNA of the Sahel!

He threw integrity, the very garb he was dressed in out through the Villa’s window once he settled and corruption presided over the nation under him from his very first appointments. Men and women with the gene of the Sahel got the knife to national cake as it was their lot to share!

TSA and IPPIS were gains of the PDP years, institutional instrument designed not to fight corruption but to kill it.

Whatever the reasons, PDP foot dragged the implementation of the policy. So when Buhari announced their “full” implementation, it was time to rejoice. So it seems to Nigerians!

But the TSA implementation excluded the NNPC, by extension the ministry of Petroleum where the President also precides as Minister!

Daylight stealing of our commonwealth came to the head when the accountant-general was suspended over divertion of TSA, IPPIS funds for personal gain!

Ahmed Idris, who was in court recently told a bemoaned session that funds were shared to some groups and individuals, including one Peace Akomas of the Revenue Mobilisation Allocation and Fiscal Commission (RMAFC), who was said to have collected N18.8 billion, for doing what, we are not told.

The second group according to our Sharer in Chief is the AGF group. They got a total sum of N18.01 billion!

The third group, Ahmed said are the Commissioners of Finance in the nine oil-producing states. They received N21.4 billion.

The money was withdrawn by Akindele, converted to US dollars and handed over to Akomas on behalf of the group. What a way to make good a one-to-one dollar and naira promise Buhari made to Nigerians!

The fourth group is called the Yari group. This group received N17.15 billion!

The entirety of the sum was transferred to the account of Fimex Professional Services on the instructions of the representative of this group: Abdulaziz Yari, former Zamfara state governor, bringing to light the united nature of our political elites whenever the people are defeated and our commonwealth are spoils to be shared.

PDP is like the face of a dress. The dress may not look presentable but as it turned out, turning the dress and wearing it the other way is worse!

Ahmed informed embarrassed nationals and her bewildered international watchers that the remaining N8.9 billion was retained by the second defendant.

He went further. N4.29 billion was converted to US dollars by Akindele as “appreciation” for the consultancy contract, and the balance of N4.6 billion was given to Akindele for whatever!

The EFCC officer added that the properties purchased with the funds by the first and third defendants were traced to various locations in Abuja, Kano, and Niger states!

That’s how goes the tale of the sharing of what PDP policy helped mopped up for successful diversion into APC pockets!

The rest of us neglected in their sharing formula are often killed when we ask for our share, not in cash but in kind.

To #EndSars, all that the youths asked for at Lekki toll gate was a government kind enough to treat them as humans but what they got instead was blood and tears. Death was visited on them!

National administration is primarily the accumulation of resources for equitable sharing. For this to take place, the knife for sharing must be taken away from those who are using it to kill the people and sharing only to their cronies.

While we are not in search of a saint as President in 2023, but who among the candidates has held the knife before and how was it used?

Did his sharing leave some people and businesses dead or reduced them to paupers while he and his clique party on the people’s resources?

The answer to those probing questions should be the value of your vote in 2023!

All we ask for is One Man from whom the milk of kindness will flow to fix insecurity, economy, health delivery, get education up and ASSU back to work! We have never needed cash but kindness.

Who among them left the cake table without looking back for a slice? That for me may be a sign of the man to be trusted with the knife for sharing only!