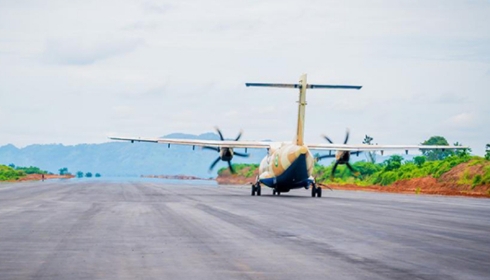 As he warms up to exit office, Governor Kayode Fayemi of Ekiti State has commissioned the state cargo airport, with first plane landing on Saturday.

The commissioning ceremony is part of the last assignments of the Governor as he sets to hand over to the Governor-Elect, Biodun Oyebanji.

The first plane, NAF 930 aircraft, conveyed the Minister for Aviation, Hadi Sirika, and his team to the event and landed on the runway at 20 minutes past 10am.

The Minister, after the landing at the new airport, described it as a bridge that will connect Ekiti State to the world and also engender national growth.

Fayemi said the project is standard and was borne out of resilience.

He expressed confidence it will positively affect the state in many ways.

The airport is expected to accommodate cargo and passenger services.

According to Fayemi, the airport is of a world-class standard, “Being a category 4E airport, this means we can accommodate large cargo – Aircrafts.”