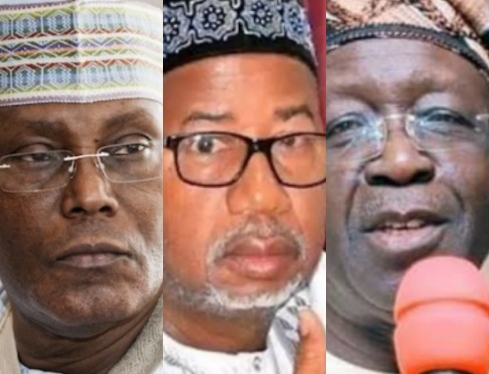 The number of opposition to the presidential candidate of the Peoples Democratic Party (PDP), Alhaji Atiku Abubakar, may have swelled as Bauchi State, a key North East state ahead of the 2023 presidential election may have joined the league of governors in the party to turn their backs against the bid of the party to produce the next President of Nigeria.

In a letter dated November 3, 2023 and addressed to the national chairman of the PDP, Senator Iyorchia Ayu and signed by the Bauchi State Governor, Senator Bala Mohammed, the state chief executive protested that he was being victimised and isolated by the presidential candidate of the PDP since the party’s presidential primary.

Recall that Governor Bala Mohammed lost in the presidential primary and have since conceded to Atiku as the flagbearer of the party.

However, in the strongly worded letter, the Bauchi State Governor clearly told the national party chairman that he would be considering other options, including withdrawing support for the party’s presidential candidate.

According to the letter equally endorsed by virtually all relevant leaders of the PDP in the state, the former presidential aspirant narrated his ordeal, saying that it was never his intention to add to the avalanche of issues requiring the concerted attention of the national chairman of the party.

“However, I am constrained by the shoddy and treacherous treatment that I have been subjected to in the aftermath of our party’s presidential primary to forward this protest and to seek your decisive intervention and rectification, the outcome of which will determine my next line of action.”

The Bala Must Go Conspiracy

“In this game of political mischief, he is in league with some political stakeholders from Bauch State, who have constituted themselves into 8 “Bala Must Go” conspiracy.

“The arrowheads of the treacherous scheme against me include former Governors, some Political Elders and other footsoldiers.

“Unfortunately for them, because of the goodwill I have with the people, most of their mischievous plans get to be revealed to me before they start implementing.

“While Alhaji Atiku Abubakar and his political cohorts insist that I must be “punished”, for contesting against him during the presidential primary of our party, the self-acclaimed “kingmekers” around the Wazirin Adamawa want a pound of flesh from me because I have refused to capitulate to their unbridled sense of entitlement, which is pregnant with selfishness and dictatorial tendencies.

“The fast group of the “Bala Must Go” campaigners are those whose ego has been bruised by my continued political relevance, rising national profile and the groundswell of public acclamation that has trailed unprecedented developmental strides of the PDP-led Administration in the state.

“Sadly, rather than abate, the mischief and treachery have escalated, under the watchful eyes and knowledge of Alhaji Atiku Abubakar who, to all intents and purposes, is the leader of the groups.

“The footprints of this undeserved hostility, bordering on anti-party activities, litter the political terrain, but I will mention just a few here”, the popular North East Governor revealed.

The Bauchi State Governor enumerated the “footprints” of what could be termed his political sins to include “My post-nomination snub by the presidential candidate, Alhaji Atiku Abubakar, notwithstanding that I promptly conceded defeat and congratulated him upon his nomination, he excluded me while visiting other aspirants who ran against him.

“Worse still, the fact that I swallowed my pride and led a delegation of my associates and major stakeholders of my state on a solidarity visit to his Asokoro residence in Abuja, to pledge my loyalty and support, was not enough for him to reciprocate my gesture of goodwill.

“Instead, he took advantage of the occasion to express his displeasure with me and to hint (FOREWARN ME) that for the purpose of his 2623 presidential campaign in Bauchi State, he would rely on his aforementioned associates, many of whom have turned out to be my traducers.”

The governor added that “Despite my purported appointment as Vice Chairman of the Presidential Campaign Council, PCC, which unlike others, I accepted, in good faith, I was excluded from the activities of the PCC as it relates to my office.

“I was deliberately sidelined from the reach-out campaign of the PCC to Kaduna which interacted with major stakeholder groups and the Northern political establishment such as the Arewa Consultative Forum (ACF), Northera Elders Forum (NEF), Sardauna Foundation, Arewa Research and Development Project, etc”, Governor Bala Mohammed further narrated.

The other “footprint”, as the governor puts it in the letter is the “Open fraternization with “Bala Must Go” exponents, most of them from the opposition, without detoxifying them of their virulent and destructive animosity towards me and the PDP-led Administration in the state.”

Another is the “Undisguised efforts to sabotage my re-election and impose on the state a Governor from another party who is ready to satisfy their selfish interests to the detriment of the larger interest of the people of the state.

The Highpoint of Betrayal

“Chairman Sir, anybody with a modicum of conscience will agree that to subject a man who in the past twelve years has adorned party loyalty like a badge to this level of humiliation is unacceptable.

“To reward a loyal party worker who has dutifully carried out every assignment given to me, contributed without equivocation to the growth and development of the party, in good times and in bad times, to the manipulation of fair weather political opportunists and opponents of the party is the highpoint of betrayal.

“And to expect that I will remain frozen to the spot where I am being politically guillotined, will be the height of delusion: only a tree would be so dumb and indifferent. If all that I can get for my loyalty to the party is the current betrayal by an arrogant and defiant group, then I should be free to take my salvation in my own hands”, the the Governor lamented.

Working Against Landmark Achievements of PDP Administration in Bauchi

Like what is playing out in Rivers State, where the Administration of Governor Nyesom Wike, who has been nicknamed Mr Project, even by the opposition, and failing to leverage on the goodwill of the government before the people, Governor Bala Mohammed accussed Alhaji Atiku Abubakar and his cohorts, as the governor called them, have failed to equally leverage of the giant strides of the PDP government in Bauchi State to market his 2023 presidential bid.

The Governor told the PDP National Chairman, Senator Iyorchia Ayu that that his supposed compatriots preferred to squander the huge electoral value.

“Your Excellency Sir, it is a painful irony that, rather than leverage the landmark achievements recorded by the PDP-led Bauchi State Government, my supposed compatriots would want to squander this huge electoral value.

“The people recognize that the unprecedented progress we have made in bringing development to the state with limited resources, within a short period, is a marked departure from the better forgotten era which was charactcrized by mediocrity, selfishness and bad governance.

No Regrets Or Apology

“But I make bold to say Sir, that so long as my crime is that I pursued my presidential ambition to a logical conclusion, despite all the intimidation, and that I have put the interest of the people who elected us, and to whom we remain accountable, above some special interests, I have no regrets or apology.

“Your Excellency, I want to place on record that my politics has always been guided by principles.

“As a democrat, I created a level playing field in the state even for the opposition. In all my career as a civil servant and a politician, I have always believed in loyalty, mutual respect, sincerity, justice and fairness.

“I have been loyal to my country, party and associates. I spent decades building relationships and political capital by serving my people.

“Let no one make any mistake about it: I will fight to protect my political career and the interest of the people who elected me and my party.

“Mr. Chairman, I wish to state that I am indeed surprised at the undeserved attitude of Alhaji Atiku Abubakar towards me.

ALSO READ  2023 Winning Strategy: Call For Sharia In Kano While Christians Are Romancing 'Taqiya' In Lagos

“He knows that have I always regarded him as an elder brother; that I have also accorded him all the respect that he deserves, as a shining light of our North East zone and a foremost nationalist and statesman.

“In recognition of these, at his birthday last year, we built and named one of the most important roads in Bauchi after him.

“Besides, you will recall that, ahead of the formal flag-off of the presidential campaign, we hosted a major rally for him in Bauchi.

“Could all these have been swept away simply because of a legitimate step that I took, which actually validated his victory?

“Why would he still “teach me a lesson” when his thrashing me at the primary was humbling enough?

“Why would he allow political opportunists to ride on his back to wreak vengeance on his younger brother whose sole preoccupation is the uplittment of the good people of Bauchi State and by extension, the North East and Nigeria? Enough of the narrative”, he said in the emotionally touching letter.

In his conclusion titled “Final Points”, Governor Bala Mohammed wrote, “Mr. Chairman, based on the above, I wish to make the following final points:

“That our presidential candidate, Alhaji Atiku Abubakar should issue a public Statement disowning those renegade elements who are neck-deep in the anti-party plot of subverting my re-election effort and to admonish members of our perty to reject the devious overtures and manipulative strategies of my detractors.

“Short of complete public repudiation of these incongruities within a reasonable time frame, coupled with explicit guarantees of sincerity of purpose and public support for my re-election by the presidential candidate, I may withdraw from the PCC and feel free to create new measures and strategies that will guarantee the election or re-election of all PDP candidates in Bauchi State and myself.

“In conclusion, permit me to reiterate, with all humility, something that I have always said: I have never claimed to be a superstar or an infallible human being.

“In this journey of life, I might have made mistakes and through acts of omission or commission, offended some people.

“To everyone that I have offended, I render my unreserved apologies and solemnly hope that they will find a place in their hearts to forgive me.

“That said, I leave my fate in the hands of Allah, the Beneficent, Compassionate and Merciful.

“Mr. Chairman, kindly accept the assurances of my highest respect and consideration. Thank you”, the letter concluded.

It was copiously signed by the Deputy Governor, Speaker of the State House of Assembly, the state chairman of the PDP, PDP candidates, among others totalling about 33 ranking party leaders and PDP stalwarts in the state.

Previous PostMr. Peter Obi, Is An Underdog, Just Like Buhari In 2015: Could He Become Another Ordained President Of Nigeria, Just Like Buhari? Next Post2023 Presidency: Why I Will Prefer To Die Than Support Atiku - Ortom Fumes