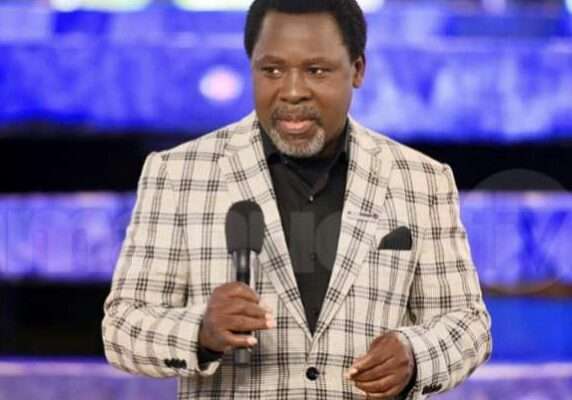 The popular Nigerian cleric, T.B. Joshua, has released yet another video showing COVID-19 patients, who both introduced themselves as University Lecturers and PhD holders, claiming to have been healed through prayers on his channel Emmanuel TV.

Doctors Dickson and Courage Ndamsa appeared on the channel via video call bearing medical reports with positive results for COVID-19, the pandemic that has infected more than ten-million throughout the globe resulting in over 500,000 casualties.

Accompanied by their two daughters, the lecturers at the University of Bamenda, Cameroon, explained they were currently “in isolation” and lamented about their symptoms which included difficulty in breathing, debilitating weakness and general pains throughout their body.

“The only reason that will make you to stop doubting is to be able to forgive yourself.” one of T.B. Joshua’s ministers counselled the family of four. “When you forgive yourself, you let go of offence.”

The minister began praying for the couple, making commands in the name of Jesus Christ to which Dr. Courage began to behave peculiarly, shaking her head and twisting her body “uncontrollably”.

“Who gave them this sickness?” the minister shouted. “I gave it to her!” the academician replied, underlying graphics on Emmanuel TV asserting it was an ‘evil spirit’ who was speaking through her.

The minister continued, “Right now, you demon, you are leaving this body with all your incurable afflictions and sicknesses. Come out, in the name of Jesus Christ!”

Dr. Courage dropped to her knees and began vomiting profusely as the minister continually commanded the “demon” to come out before finally declaring her “free”.

Her husband, Dr. Ndamsa and their two young daughters, were equally prayed for and declared free from the deadly virus.

“Jesus healed us. The miracle is beyond the understanding of man and science.” Dr. Ndamsa, who lectures in Economics, exclaimed, further explaining the whole family went for a medical test the day after their ‘healing’.

He advised large nations around the world to “look beyond science” and “carry God along” in their decisions, plans and actions against the scourge of COVID-19.

“At one point, I felt my hands started shaking. I tried to hold myself but before I knew it, my body was vibrating and that is the only thing I could remember,” she recollected.

Both testified that all symptoms associated with the virus disappeared immediately after the prayers, prompting them to go for medical verification of their healing.

“God has given everyone plenty of evidence to believe in Him. Remember, we treat; God heals. So, let us include God in our decisions. There is no fear, no panic. With God, all things are possible,” TB Joshua commented on his social media handles in response to the ‘miracle’.

News of COVID-19 healings amid T.B. Joshua’s prayer sessions even prompted a response from the World Health Organization (WHO) after they were questioned about the miracle of a medical doctor who admitted Joshua’s prayers cured him.

WHO’s Executive Director of Health Emergencies, Dr. Michael Ryan, expressed readiness of the international health agencies to collaborate with bodies such as The Synagogue Church of All Nations (SCOAN) to advance the fight against COVID-19 whilst the Director General of WHO Dr. Ghebreyesus added that faith and science should “go together”.

Emmanuel TV’s YouTube videos have been viewed over 600 million times and the channel has nearly 1.7 million subscribers.

[…] her notice of endorsement dated February 21, 2021, Ubong, who is also the President/CEO of Dovemedium International, described Cornell Udofia as […]