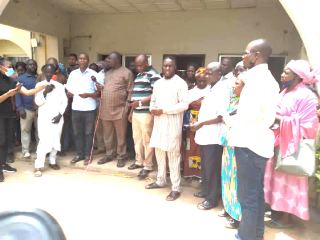 Worried by the prolonged inaction by Government, the Coalition of Northern Groups (CNG) on Monday reached out to the estranged peasant parents of the 32 students of Agric Mechanization Institute, Kaduna who have been abandoned in captivity for more than three weeks now.

The meeting, attended by parents of the captives, fellow students and a delegation of the CNG Kaduna state chapter led by its National Director of Action and Mobilization, Aminu Adam, was held in the premises of the Institute at Mando.

The CNG expressed sympathy with the parents and students of the Institute who are mainly from poor backgrounds and vowed to join in their struggle for the rescue of the innocent captives.

The Spokesperson, Abdul-Azeez Suleiman in a statement said that the Coalition, “in its tradition of allowing time for government action, had watched the events in the last three weeks and is convinced that the waiting is getting too long.”

The Street Reporters gathered at the meeting, it was agreed that a joint front for a prolonged struggle be formed to to initiate sustained peaceful mass protests to force government action if the students are not rescued in the coming two days.

The protests, according to the group, shall aim to draw national and international attention to the uncertainty surrounding the circumstances of the poor students in captivity all this long while government is not forthcoming with feasible action.

“It is worrying that rather than pacify and encourage the parents and fellow students of the captives, the state government has threatened to deal with any independent alternative action to its waiting game at the expense of the students who remain exposed to unimaginable conditions for this long”, the CNG said.