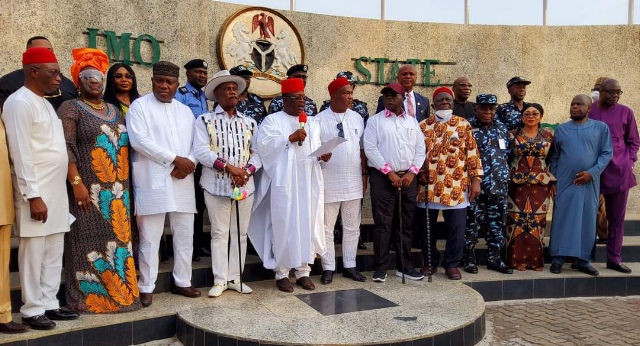 Foremost pan-Igbo sociopolitical pressure group, the South East Revival Group (SERG) has described the setting up of security outfit codenamed ‘EbubeAgu’ by South East Governors as “yet another Jamboree” and a “convenient political outing aimed at pleasing the federal establishment rather than the people.”

The SERG in a statement signed by its President/National Coordinator, Chief Willy Ezugwu, said the group aligns itself to the position of Dr. Sam Amadi, a lawyer and lecturer based in Abuja to the extent that “the federal government’s anti-insurgency policy has continued to fail in tackling the security challenges in the country.

“If federal government’s anti-crime and counter terrorism policies were working, there would have been no need for the deafening call for a special security arrangement for the South East people in the first place.

“So, for the South East Governors to declared, and we quote: “that the five South East states are on the same page with the federal government on the issue of security challenges in the country. To this end, the meeting makes it absolutely clear that the South east will stand resolutely with the federal government to fight terrorists and bandits to a finish”, the Governors said.

“So, the SERG sees the latest move as yet another Jamboree and a convenient political outing aimed at pleasing the federal establishment rather than the people of the region.

“We practically pleaded with them since the COVID-19 pandemic lockdown to set of a central South East security outfit but it didn’t go down well with them until the first Ebonyi State herdsmen attack on their host communities.

“After the last statement issued by the South East Revival Group, urging the people to hold the governors responsible for security issues and attendant loss of lives and property, the Governors hurriedly embacked on another security Jamboree to please the federal government that have in the last six years failed to provide adequate security nationwide.

“It was laughable to read that the governors ordered security agencies to implement ban on opening grazing in the region. Is there any law establishing the EbubeAgu security outfit that has a clause banning open grazing in the South East region?

“We therefore call on all well meaning Igbo sons and daughters, both at home and in the diaspora, to prevail on the South East Governors to individually enact laws banning open grazing and establishing the security outfit in their respective states or they should consult the South West Governors to understudy how they birthed their Amotekun regional security outfit.

“Better still, our governors should visit Benue State where there is an anti-open gazing law with a commission established by law to supervise its enforcement.

“For us, it is about time the South East governors proved the Indigenous People of Biafra (IPOB) wrong on setting up their own security network and declaring to the people that they are their messiah.

“Our people are enterprising and should not be deceived by their governors’ jamboree called ‘EbubeAgu’. We deserve a better legal security arrangement than what the South East Governors are offering at the moment.

“We are aware that most of our governors are either positioning to emerge Presidential candidate or a vice presidential running mate in 2023. But must they now sacrifice the well-being of citizens on the alter of politics? We are watching!”, the SERG said.

You can call us using the “Call Us Now” button on this site. Or Email your article or press release to us via: news@streetreporters.ng and follow us on Twitter and Instagram @StreetReporters and Facebook at www.facebook.com/StreetReporters.ng to get our latest updates! ============================
ALSO READ  Queen Elizabeth II: Labour Party Condoles UK Royal Family, People of Great Britain
Dear Reader,