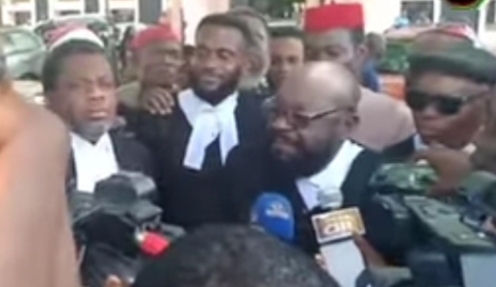 The leader of the Indigenous People of Biafra (IPOB), Nnamdi Kanu, has instituted a fresh court action against Nigerian government through his Special Counsel, Barrister Aloy Ejimakor.

The IPOB leader’s filed the case against the Attorney-General of the Federation and Minister of Justice, Abubakar Malami, over repeated claims that his client jumped bail back in 2017.

The IPOB leader, therefore, demanded the court to grant him N20,000,000,000.00 (Twenty Billion Naira only) for general and exemplary damages.

This was revealed in court documents filed last Friday at an Abia State High Court, which described Malami’s constant claim that the IPOB leader jumped bail as “libellous and defamatory” because “the Umuahia court already ruled” that Kanu did not jump bail.

Ejimakor went on to say that Malami or other Nigerian government representatives claiming Kanu jumped bail are “highly prejudicial and injurious” to the detained Biafran leader’s pending court cases.

He said, “Last week, I filed a Suit against AGF Malami to stop him from making any further defamatory publication that Onyendu #MNK (Mazi Nnamdi Kanu) jumped bail.

“Such publication is highly prejudicial and injurious to MNK’s other cases pending in various courts. It has to stop!” Ejimakor wrote on his Twitter handle with accompanying documents.

The document reads in part: 1. A DECLARATION of this Honorable Court that, in view of the said Judgment of Abia State High Court, the Defendant’s published statements or utterances to the effect that Claimant jumped bail, as published in the said Vanguard newspaper publication, are libelous and defamatory.

ALSO READ  The Crap Called Ejagham Governorship Is A Metamorphosis As You Can't Jump From 1 To 10, Without Passing Through 9

“3. AN ORDER of this Honorable Court directing the Defendant to write and deliver to the Claimant, an unreserved letter of apology. The letter of apology shall be prominently and boldly published full-page in two Nigerian Newspapers of national circulation, namely: Guardian Newspaper and Sun Newspaper.

“4, AN ORDER of perpetual injunction restraining the Defendant from further and forever uttering the said defamatory and libelous words about or concerning the Claimant.

“5. AN ORDER of this Honorable Court directing the Defendant to pay to the Claimant the sum of N20,000,000,000.00 (Twenty Billion Naira only) being general and exemplary damages.

“6. AN ORDER directing the Defendant to write and deliver to his superior officer and/or his employer a Legal Opinion to the effect that the Claimant did not jump bail in view of the said Judgment of the High Court of Abia State, and copy of said Legal Opinion simultaneously be delivered to the Claimant.”

“7. AN ORDER of this Honorable Court directing the Defendant to pay the cost of this Suit. 8. AND SUCH FURTHER ORDER(S) as this Honourable Court may deem fit and expedient to make in the circumstance.”