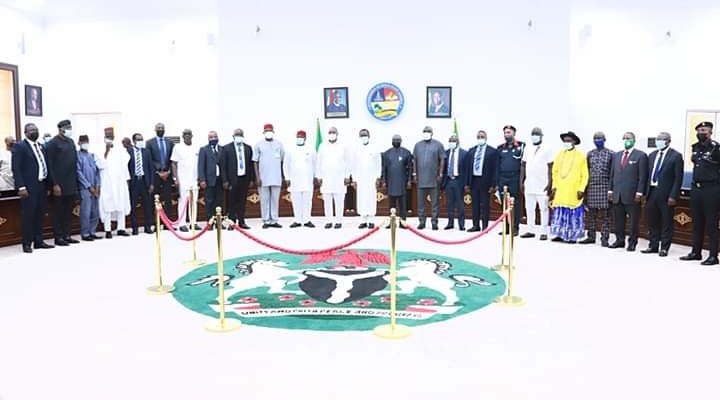 Delta State Governor, Senator (Dr) Ifeanyi Okowa, on Tuesday, inaugurated a 19-member Livestock Management Committee as part of the provisions of the anti-open grazing law recently enacted in the state.

Inaugurating the committee at Government House, Asaba, the governor charged the members to ensure that the law was effectively implemented in the best interest of citizens of the state.

He said that Delta had been home to many diverse people living peacefully among the indigenes until the influx of criminal elements who had turned the bushes to den of criminality.

“I must thank them sincerely for putting a seal in the law which, was an Executive Bill following the resolution of the Southern Governors’ Forum which met in Asaba.

“I want to use this medium to thank members who have accepted to serve in the committee.

“There is no doubt that we have been living peacefully with our brothers from the North.

“Unfortunately, over time we have a lot of persons who have come into our bushes and many times unknown to those whom our people relate with and they have turned our bushes into a den of criminality.

“They have been involved in kidnapping, killings and raping of our women and also extorting people going about their legitimate businesses.

“Some of them deliberately take their cattle to farms and consume crops belonging to farmers, and obviously, this is not acceptable. So, this law is put together to regulate livestock management in the state,’’ he said.

Okowa explained that in constituting the committee the government ensured that there were representatives of the Delta State Cattle Rearers and Breeders Association and the Butchers Union in the committee.

He said that the government was not also unmindful of those who went about their normal businesses of cattle-rearing without infringing on the rights of farmers, but added that there was need to be protective of farmers and to fish out every criminal element who had remained a security threat to the state.

“It is my hope that this Committee will carry out its work with decency in such a manner that will be beneficial to the people of the state,’’ he stressed.

The governor urged the chairman and members of the committee to work closely with traditional rulers, presidents-general of communities and other stakeholders to put all processes in place to execute the law to the best intent for which it was made.

He further charged the committee to embark on serious advocacy to enlighten the people and livestock breeders on the need to obey the law, saying “there is need for lots of advocacy and you have to ensure that you execute the law to the best interest of the people.”

Responding, Chairman of the Committee, who is Commissioner for Agriculture and Natural Resources , Mr Julius Egbedi, thanked the governor for the opportunity to serve, assuring that the Committee will carry out the task in the best interest of the people.

He stated that the Committee would work towards ensuring harmonious living between farmers and livestock breeders.

Deputy Governor of the state, Mr Kingsley Otuaro, Deputy Speaker of the State House of Assembly, Christopher Ochor and other top government functionaries witnessed the inauguration.