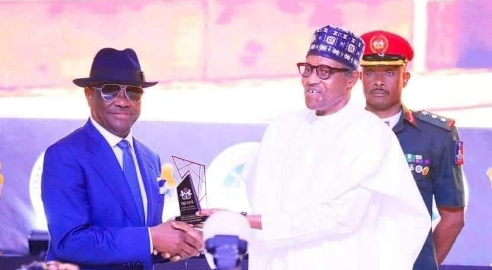 The governor who dissociated himself from affected state governors was reacting to an accusation by President Muhammadu Buhari that governors have continued to deliberately deplete remittances released to various Local Government Councils in their States.

Wike, who spoke at the inauguration of Mgbuosimini Ring and Internal Roads in Rumueme Kingdom of Obio-Akpor local government area of Rivers State on Friday, said the generalisation by President Buhari was unfair.

He stated that since 2015, he has never had any reason to tamper with local government funds.

He has, therefore, urged the President as a true leader, to tell Nigerians those specific governors pilfering local council funds.

“I have never and I have no reason to do that. So, Mr. President tell us who are those people. You know them, tell us. It is not good to make class defamation of saying governors. Please, I am not one of those governors.

“So, Mr President, please, spare me, tell Nigerians that the Integrity Governors are not part of them.

“We have integrity. And do us a favour to announce all those states that they are taking local government money because you have the records.”

The governor emphasised that when he was a council chairman under the administration of former governor, Dr. Peter Odili, the governor then never touched their funds, and that eas an example he has continued to practice.

He noted that ordinarily, most of the road projects his administration had constructed should have been done by local government councils, but he has never asked any council for partnership to fund any project.

The governor informed that his administration has also given optimal consideration to the payment of pension and gratuity.

According to him, over N3bn was spent monthly by the State to cater for that concern.

Previous Post2023: Group Unveils App To Tackle Sentimental Voting Next PostAl-Mustapha: Boko Haram, a Plot for the Plundering of Nigeria?