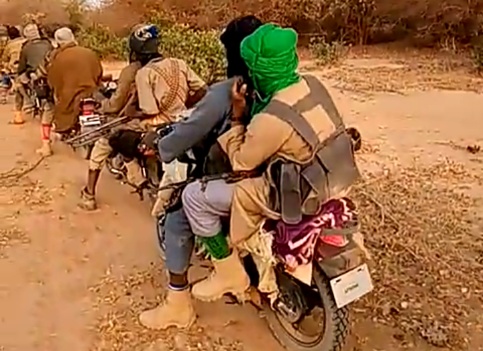 Number of Kidnap victims of weekend attacks by gunmen suspected to be terrorists in two separate communities in Batsari and Funtua local governments in President Muhammadu Buhari home state, Katsina State, at the weekend, has risen to no fewer than 46.

According to a report by Daily Trust, one person was killed as some 28 people were abducted in Karare village of Batsari Local Government Area on Friday.

The terrorists, numbering about 40 and riding on motorcycles, were said to have invaded the village in the morning hours and herded off the victims, including women and children.

It was gathered that some of the abductees were students from Kokiya village heading to Government Day Secondary School, Karare.

A resident who spoke on the condition of anonymity said the attackers came from the southern part of the village and started shooting sporadically, leading to the death of one person.

“They abducted 28 people, including students, but later released four of them. Those released include one Malam Ladan and three children. They sent them a message that they would not accept old naira notes for ransom.

“Later, one other person escaped. So as we speak, there are 23 people currently with the bandits, but they did not make any ransom demand,” he said.

Another resident who shared his ordeal said he went into a healthcare centre from where he jumped over a fence to escape abduction, adding that one person was confirmed dead.

In a related development, gunmen suspected to be bandits attacked a mosque in Maigamji village along Funtua – Dandume Road and opened fire on worshippers during evening (isha’i) prayer.

Residents of the village said the attack took place around 7:15pm on Saturday.

A former councillor of Maigamji ward, Alhaji Lawal Maigamji said when the bandits came they opened fire and shot two people in the mosque, including the Imam leading the prayers, Malam Yusha’u and one other, Hussaini Jamo who are receiving treatment at General Hospital Funtua.

“They surrounded the mosque when Isha’i congregational prayer was being conducted. After shooting Imam Yusha’u on the hand and Hussaini Jamo, they abducted 18 people and made away with them into the bush,” Lawal Maigamji disclosed.

He added that later at night, four of the abducted victims managed to escape from their captives while in transit.

“We received reports with conflicting figures. Some say up to 30 people were abducted and others say less than that. We are still investigating the matter as the rescue operation is ongoing.

“With regards to Yargamji, 13 were missing, two sustained gunshot injuries including the Imam leading the prayer, while four were rescued.

“Our men in collaboration with the local vigilante are working together to rescue those abducted,” he said.