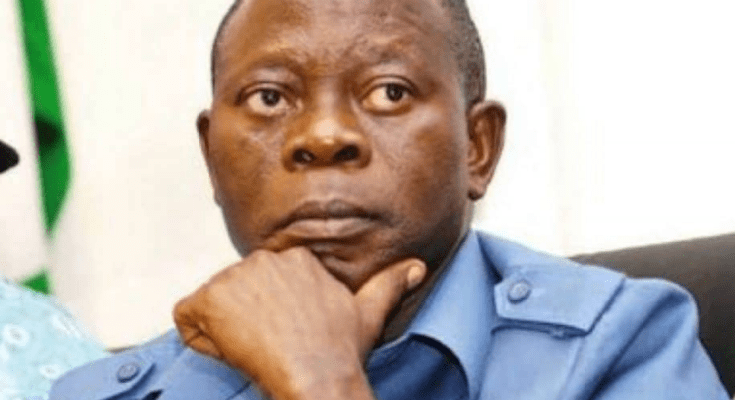 Edo 2020: Ize-Iyamu Disowns Oshiomhole, You Can’t Imagine What He Said

The candidate of the All Progressives Congress (APC) in the forthcoming governorship election in Edo State, Pastor Osagie Ize-Iyamu, has distanced himself from the former national chairman of his party, Adams Oshiomhole.

Underscoring the electoral value of the former governor of the state, Ize-Iyamu disowned Oshiomhole clearly saying that he is not the face of his campaign.

He said Oshiomhole is not the face of his campaign, noting that it is the Peoples Democratic Party (PDP) that is dragging the former governor into the fray.

He Said: “Let me first inform you that Comrade Adams Oshiomhole is not the face of the campaign. As you rightly know, I am the gubernatorial candidate and Malam Gani Audu is the deputy.

“It is the PDP that keeps mentioning his name, talking about him and playing tapes as if he is the candidate.

“But I want to inform you that I am very well known in Edo. I have lived there all my life. I have been chief of staff, secretary to the state government and we also have a local director-general of the campaign.

“Of course, Adams Oshiomhole comes from Edo, he is an APC member and it is natural for him to campaign for our party, but certainly he is not the face, unlike what happened four years ago where, maybe, the candidate could not speak and somebody had to speak for him.

“But anyone will tell you that everywhere I have gone, I have been the one speaking. So, that statement is not correct”, he said.

Political watchers say the categorical statement by Ize-Iyamu, disowning Oshiomhole as the face of his campaign points to the declining electoral value of the former national chairman of the APC in the state in recent times.