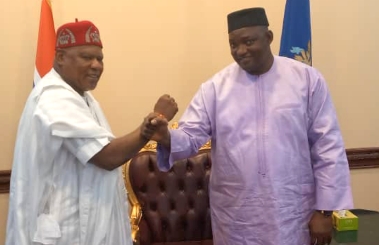 In a statement issued in Banjul, The Gambian capital, Chief Ezugwu, who is in The Gambia on the invitation of the party, said “the President, as the leader and Secretary General of the new party, has shown from the large crowd of delegates and supporters that gathered at the Independence Stadium in Bakau for the launch that he has good followers in the country.

“But I believe that The Gambian citizens should sustain their support for the President and remain united.

“By rising above ethnic and partisan differences, and by standing with President Adama Barrow as he continues on the path of national development, the West African country will be better for it”, he said.

Backed by a coalition of seven opposition parties, Barrow won the December 2016 presidential election and ended the 22 year-long rule of former President Yahya Jammeh, who had been forced into exile under the pressure of a West African military intervention, after refusing to admit defeat.

President Barrow has now been at the head of the country since January 2017.