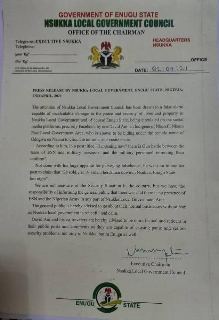 Following some falsehoods being peddled on social media platforms by some scaremongers and hired hirelings, painting negative security situations in Nsukka Local Government Area, the Chairman of the council, Bar. Cosmos Ugwueze has warned the detractors to desist from such act and always verify their information before peddling them to the public.

In a statement, he issued and signed yesterday, Hon. Ugwueze said: “The attention of Nsukka Local Government Council has been drawn to a false alarm capable of incalculable damage to the peace and security of lives and property in Nsukka Local Government and of course Enugu State, being circulated on the social media platforms, precisely Facebook by one David Ani, an Indigene of Nkerefi, Nkanu East Local Government Area, who is known to be hiding under the pseudo name of Odogwu na Nkanu to circulate untruths and create panic.

“Not done with his large appetite for purveying falsehoods, he went on in another post to claim that “28 soldiers , 19 Fulani herdsmen down in Nsukka, Enugu State
last night”.

“We have the responsibility of informing the general public that there was and there is no presence of ESN anywhere in Nsukka Local Government Area and there is no incident involving Nigeria Army, or Fulani herdsmen in any part of the council area.

“The general public is hereby advised to go about their normal businesses without fear as Nsukka local government is peaceful and calm.

“David Ani and his co-travelers are hereby advised to be more factual and reticent in their public posts and comments as they are capable of causing panic and serious security problems, not only in Nsukka, but in Enugu as well.”

Previous PostAlhaji Tajudden Bisimillahi Felicitates with Christains at Easter Next Post2023: Alakija, Ohuabunwa, Sowore; Who Do You See Coming?