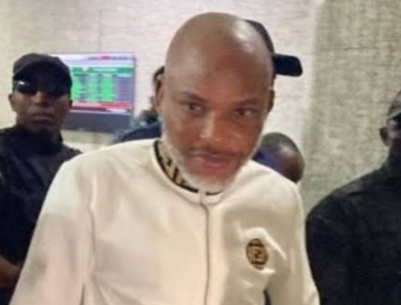 The Court of Appeal in Abuja on Friday, stopped the execution of its judgment that quashed the terrorism charge and ordered the release of leader of the proscribed Indigenous People of Biafra, (IPOB) Nnamdi Kanu.

The the appellate court on Oct. 13 delivered a judgment which faulted the rendition of Kanu from Kenya to Nigeria and also set aside the terrorism charges against him.

The federal government, not satisfied with this judgment, said that it would explore every legal avenue to quash the judgment of the appellate court and headed to the Supreme Court.

The government, after appealing the appellate court’s judgment, filed a stay of execution on the grounds that releasing Kanu would not be in the interest of national security.

After taking arguments from counsel, a three-member panel of justices led by Justice Haruna Tsammani on Monday, reserved ruling in the matter.

Delivering the ruling on Friday, Justice Tsammani held that the Federal Government’s application for stay of execution had merit and ordered that the execution of the judgment be put on hold.

Justice Tsammani, in the brief ruling held that the counter affidavit filed by Kanu’s legal team in opposition to the government‘s application was misleading.

The judge said that Kanu’s counsel did not properly state the facts of the matter. Consequently, the court granted a stay of execution of earlier judgment in favour of Kanu. 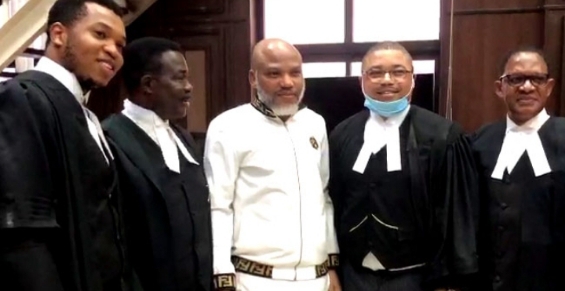 The court also ruled that the record of proceedings in respect of the Oct. 13 judgment be forwarded to the apex court within seven days to ensure expeditious hearing.

Whereas the presiding Justice, Jummai Hanatu Sankey, who was hitherto in the Gombe Division of the court, has been moved to Awka Division, Justice Oludotun Adetope-Okojie who delivered the lead judgement, was transferred to Owerri, while the third member of the panel, Justice Ebiowei Tobi, was moved to Gombe.

A memo dated October 17, which was signed by the President of the Court of Appeal, Justice Monica Dongban-Mensem, stressed that the new posting for the justices was with immediate effect as they were expected to report to their new stations by October 21, few days before the Federal Government’s application for stay of execution of the Appeal Court order freeing the embattled IPOB leader.

Mazi Nnamdi Kanu has repeatedly called for the breakaway of a significant chunk of southern Nigeria to form the Republic of Biafra.

On October 2015, he was arrested by Nigerian authorities on an 11-count charge bordering on “terrorism, treasonable felony, managing an unlawful society, publication of defamatory matter, illegal possession of firearms and improper importation of goods, among others.”

He was granted bail on April 2017 for medical reasons.

However, Mr Kanu fled the country in September 2017 after an invasion of his home by the military in Afara-Ukwu, near Umuahia, Abia State.

He was then sighted in Israel and later continued to rally his supporters in Nigeria to employ violence in achieving secession.

“He has, upon jumping bail, been accused of engaging in subversive activities that include inciting violence through television, radio and online broadcasts against Nigeria and Nigerian State and institutions,” Minister of Justice, Abubakar Malami said after Kanu was rearrested and brought back to Nigeria in June 2021.

“Kanu was also accused of instigating violence especially in the Southeastern Nigeria that resulted in the loss of lives and property of civilians, military, para military, police forces and destruction of civil institutions and symbols of authorities.”

Mr Kanu has denied any wrongdoing.