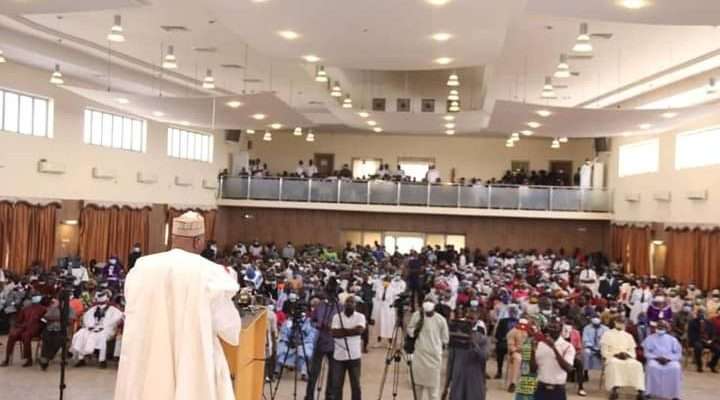 . Says ‘ I’ll Continue to Provide Good Leadership to All Regardless of Different Affiliations ‘

…As CAN Describes Governor Yahaya as Instrument of Peace, Unity, Progress

The Governor was speaking when he granted audience to the Christian community under the auspices of the Christian Association of Nigeria, CAN, Gombe State Chapter on a Christmas/New Year homage at the Government House.

The Governor, described the visit as significant and a Thanksgiving session which usually affords the Christian community in the State opportunity to identify and support the government in its effort to take the people of the State to greater heights.

He thanked the Christian community for the prayers and the support since his gubernatorial election campaign days, the role he said contributed immensely to the success of his administration.

“On coming to office in 2019 I swore by the Quran as a Muslim that I shall lead the people with fairness, justice and equity and I believe am doing my best in order to actualize it. That is why we take development to all the nooks and crannies of Gombe State. When you talk of roads we said we shall put up one hundred kilometres of roads in each of the 11 Local Government Area of the State, under our Network Eleven Hundred concept, and we are on course to deliver “.

Governor Inuwa Yahaya cited as reference, the road project in Balanga, one of the most difficult terrains which he said was avoided by the past administration, assuring that “by the grace of God this administration will ensure the actualisation of the road which will link up the southern and northern parts of Balanga LGA as well as make it easier for those in the southern axis to access their headquarters without having to pass through Kaltungo, Billiri, Akko, Gombe and Yamaltu Deba.

He said same applies to Malala and Dukkuyel in Dukku Local Government Area which is at the extreme end of the State from the northern axis and some more other places across the State.

The Governor said his administration will continue to put up good roads, Schools, health facilities and other social amenities for the benefit of the people.

“In fact like I always say, it is the elite that always use religion, ethnicity and regionalism in order to divide the people so that they reap benefit out of it, any gentle or humane leader will work to get to the satisfaction of, and in accordance with the yearnings and aspirations of all and sundry because the essence of leadership to to provide service to the people in a just manner”.

He assured the people of the State that in spite of the economic hardship occasioned by the Coronavirus Pandamic and other leadership challenges, his administration will continue to remain focused and deliver on its mandate.

Governor Inuwa Yahaya called for support across board for his administration to succeed on delivering the goods, saying poverty, disease and hunger have no eyes as they can catch up with anyone irrespective of tribe or religion.

The Governor who emphasized the need for peaceful coexistence, said without peace no development can be achieved, praising the people of the State for embracing the peace and maintaining it.

He urged the Christian community to continue to pray for the sustenance of peace and harmony in the State so that his administration can take the people out of bondage to the next level.

On some requests made by the Christian Association of Nigeria, Governor Inuwa Yahaya said his administration will not shy away from appointing individuals who laboured towards the formation of Government and even those who are not deep into politics but have the capacity to deliver in the quest for good governance.

The Governor equally assured the Christian community that the board for the State Christian Pilgrims Welfare Board will soon be constituted, disclosing that his administration has also approved 70 seats for this year’s Pilgrimage to Israel.

He said as the economy picks up, his administration will continue to do its best to ensure that religious bodies practice their faith without hindrance.

On the proposed upgrade of the CAN centre, Governor Inuwa Yahaya approved the sum of 25 million naira for the CAN to effect the project it deemed necessary at the centre in addition to 10 million naira dolled out to them as new year gift.

The Gombe State Caretaker Chairman of the Christian Association of Nigeria, CAN, Rev. Sunday Congo represented by the Caretaker Secretary, Apostle John Adetiba said they were at the Government House to felicitate with the Governor on the new year and to bring to him good tidings of the Christmas.

He commended the Governor for correcting the financial abnormalities inherent in the State Christian Pilgrims Welfare Board for which to no fault of his,Christians in the State missed the last year’s Pilgrimage to Jerusalem.

The clergy described one of the Governor’s flagship projects, the Gombe Goes Green as an administrative midas touch which will will help to reclaim the environment in the face of climate change and global warming.

Earlier in his remarks, the North East CAN chairman, Rev. Abare Kallah said the Christian community stands with governor Muhammadu Inuwa Yahaya for his developmental and administrative acumen in carrying every section of the state along, calling on him to maintain the excellent disposition.

He thanked the Governor for appointing a good number of Christians into sensitive positions of his administration.

In his goodwill message, Reverend J. R. Mangai described Governor Inuwa Yahaya as an instrument of peace, unity and development, praying Almighty God to continue to guide him as he pilots the affairs of the state.

Highlights of the solidarity visit were special prayers for the Governor and his team as well as songs ministrations by different groups.