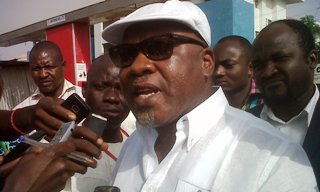 Why Presidential, Governorship Debates Should Be Legalised – CNPP Tells NASS

On the heels of the controversy surrounding the ongoing presidential debates in Nigeria ahead of the 2023 general elections, the Conference Of Nigeria Political Parties (CNPP) has called on the National Assembly (NASS) to take steps to enact a law to make participation in presidential and governorship debates mandatory part of Nigerian electoral process.

The CNPP in a statement signed by its Secretary General, Chief Willy Ezugwu, recalled that “in the history of election debates in the country, it is either that some candidates deliberately refused to attend the debates or they were excluded by the organisers based on their prejudices.”

According to the CNPP, “legalising the presidential and governorship debates will go a long way in helping the electorates to make informed decisions on the choice of the Chief Executive Officer of a state or the federal Republic of Nigeria or even the choice of a lawmaker to represent his or her constituency.”

The CNPP added that “In advanced democracies, like the United States where Nigeria borrowed her presidential system from, candidate debates are not constitutionally mandated but they are considered an intrinsic part of the American electoral process such that no serious contender in the United States presidential race can afford to stay away from any scheduled candidates’ debates.

“While Nigeria has been holding presidential and governorship debates, they have been everything but organised and mandatory for candidates to appear.

“In Nigeria, media organisations and nongovernmental bodies have attempted to set up platforms for presidential and governorship debates but participations remained at the discretion of the candidates or that of the organisers.

“So, over the years, organisers selected preferred candidates they considered to be top contenders and unjustly excluded the rest of the contestants, thereby failing to provide a level playing field for all candidates to participate.

“The CNPP believes that in order for election debates by candidates to achieve the intended purposes, there is need to make governorship and presidential debates mandatory for all candidates and their political parties to participate.

“Candidates debates should be consciously made a veritable platform for the general public to screen persons seeking to represent them at any level in government through elections and as an avenue to increase political participation in the country.

“The CNPP therefore calls on the National Assembly to immediately set up modalities for making it customary for the candidates to engage in a debate as part of Nigeria’s electioneering process, especially at the presidential and governorship levels in the first instance.

“This can be achieved by enacting a law for the establishment of a National Commission on Election Debates (CED), with a mandate to organise debates for candidates in Nigeria.

“The commission should be empowered to appropriately sanction candidates that fails to participate, including imposing severe penalties in form of fines, among others.

“If it takes Nigeria a constitution ammendment to achieve this, it will be a legacy achievement worth leaving by any administration as the overall gains of establishing such a Commission for the purposes of developing and deepening the Nigerian democracy cannot be quantified in monetary terms.

“Mandatory candidate debates will, therefore, serve as an enlightenment platform and an avenue for engagement of candidates, giving the electorates the opportunity to interface with their would-be leaders for proper assessment to determine their levels of preparedness for leadership, their commitment to good governance and their readiness to be held accountable by the electorates after winning elections”, the CNPP stated.