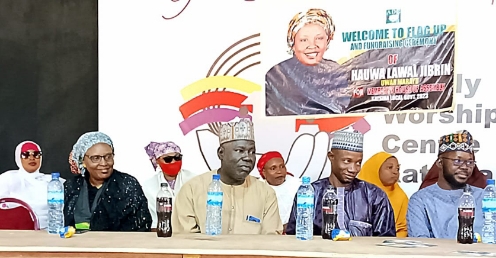 The only female candidate seeking elective position in Katsina State of Nigeria, Hajiya Hauwa Lawal Jibrin has flagged-off her campaign with a vow to check female molestation, including indiscriminate divorce.

Hajiya Hauwa, the only female among the over 400 contestants for various positions in the 2023 general elections, flagged-off her campaign in Katsina, declaring a five-point agenda to turn around the plight of members of her constituency.

ALSO READ  Idemili North And South 2023: What My Constituents Should Expect If Elected — Ike Cubana

Hauwa is seeking to represent Katsina Local Government on the platform of the African Democratic Congress, ADC, in the state House of Assembly.

She spoke on Sunday at the President Yar’Adua Wing of Fadama Hotel in Katsina.

Presenting her five-point agenda geared towards women emancipation and youth empowerment, Hajiya Hauwa decried the enslavement of women by bandits and the indiscriminate divorce men subject their wives to, promising to bring it to a halt if elected into the state house assembly.

Hajiya Hawa, who further noted that women are left behind in Katsina State, said the time is ripe for women to take their place in the state assembly to address their plight, since men have failed to do so on countless occasion.

“Men here are fond of divorcing their wives, leaving them with the responsibility of feeding and educating their children without any support as prescribed by Islam.

“This kind of behavior causes many women to engage in unholy acts to fend for the children.

“I am assuring you that if elected I will seek the cooperation of religious scholars and other relevant stakeholders to compel such men to take care of their children as prescribed by Islam.

“And if they fail I will ensure they are prosecuted,” Hajiya Hawa said.

Previous Post75% Of Counter-insurgency Operations Are Non-kinetic, Says Theater Commander Next PostDelta Is Most Solvent State In Nigeria - Finance Commissioner