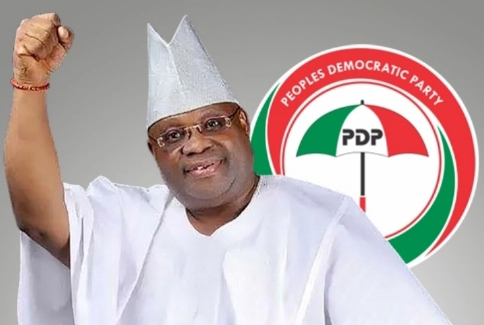 The newly sworn-in Governor of Osun State, Ademola Adeleke, made his first appointment, naming Rasheed Olawale as his Chief Press Secretary even the dancing Senator announced the suspension of the Chairman of the Osun State Independent Electoral Commission (OSIEC), Mr. Segun Oladitan.

Governor Adeleke named Kazeem Akinleye as his Chief of Staff and Teslim Igbalaye as the Secretary to the State Government.

The appointments, according to the governor, take immediate effect.

Adeleke, who was sworn in on Sunday froze all government accounts and also reversed the state’s name from the State of Osun to the constitutional name, Osun State.

The Governor accused his predecessor, Gboyega Oyetola, of taking some malicious actions against him, including the appointment of permanent secretaries.

Adeleke thus ordered the “immediate freezing of all government accounts in banks and other financial institutions. Immediate establishment of a panel to carry out an inventory and recover all government assets.

“An immediate establishment of a panel to review all appointments and major decisions of the immediate past administration taken after the 17th of July 2022.

“An immediate reversal to the constitutionally recognised name of our state, Osun State. All government insignia, correspondences, and signages should henceforth reflect Osun State rather than State of Osun which is unknown to the Nigerian constitution.”

Governor Adeleke was elected on the platform of the Peoples Democratic Party (PDP) at the governorship election in July.

He floored the incumbent Governor Oyetola of the All Progressives Congress (APC) who sought re-election.

The PDP candidate won 17 of the 30 local government and was declared winner by the Independent National Electoral Commission (INEC).

The APC candidate has since dragged the winner to the election tribunal over alleged electoral malfeasance.

The Secretary to the State Government, Tesleem Igbalaye, made the announcement in a statement on Monday.

“This suspension is sequel to several petitions bordering on financial impropriety, dereliction of duty, absenteeism and abuse of office against the said chairman and members of the commission.

Governor Adeleke, in another unexpected move, ordered that all appointments of traditional rulers made by the immediate past administration of Gboyega Oyetola be put on hold.

He said the measure was to ensure strict compliance with the due process of chieftaincy declarations and native law, custom and tradition relating to such chieftaincies.

This order was contained in six Executive Orders of the governor issued on Monday and made available to journalists in a statement by Adeleke’s spokesperson, Rasheed Olawale.