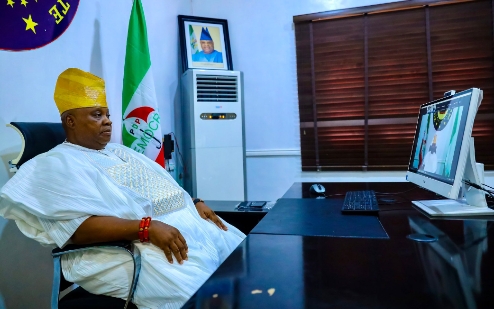 Osun State Governor, Senator Ademola Adeleke has given insights into the actions he took in his first seven days in office as the governor, pledges to maintain transparency.

In series of tweets on Sunday, he said, My first week as your governor was exciting and straight to business.

“I started with a few house cleaning items to ensure a smooth transition since there was no official handover.

“Another major development during the week was the ongoing briefings by Ministries, Departments and Agencies of government”, Governor Adeleke explained.

“The briefing from the Ministry of Finance exposed the lie in the claim of Mr Gboyega Oyetola to have left N14 billion naira within the state treasury.

ALSO READ  How You Could Enslave Yourselves With Your PVCs - SDP Presidential Candidate, Adebayo, To Nigerian Voters

“N76 billion naira was left as debt and liabilities on salary, pension and gratuities.

“It was a shocking revelation and as your governor, I owe you a duty to be fully transparent by carrying you along”, he vowed.

Previous Post2023: Why You Shouldn't Fall For Fake Promises Like in 2015 - Okowa To Nigerians Next PostRights Group Slams Nigerian Government Over Turji Kachalla’s Brazenness, Alleged Military’s Biases For Fulani Terrorists