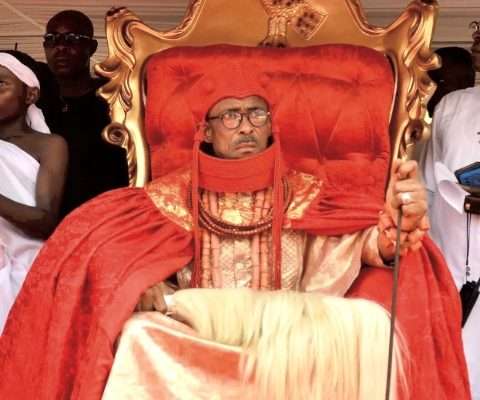 Agadagba Of Egbema Kingdom Receives Staff Of Office Amid Fanfare

He was represented at the colourful ceremony yesterday by the state Deputy Governor, Deacon Kingsley Burutu Otuaro.

The Agadagba in his speech expressed appreciation for honour by the the Delta State government.

Recalling the processes leading to his enthronement, the monarch said, “Firstly, all glory goes to God Almighty for making it possible for me to ascend the throne of my fathers and making this auspicious occasion a reality.

“My selection, installation, and traditional coronation as Bini-Pere IV, Agadagba of the revered Egbema Kingdom, are not accidents.

“In line with the gazette establishing the kingdom, it was the turn of the Ogbudugbudu ruling house to produce the next king.

“Providence fell on me, having fulfilled all traditional rites and the traditional coronation, and I was proclaimed and presented as the Agadagba of Egbema Kingdom on the 23rd of November, 2022”, he said.

The Agadagba of Egbema in his appreciation to the state government said, “At this juncture, I have the distinguished honor and pleasure to formally thank His Excellency, the Executive Governor of Delta State, Sen. Dr. Ifeanyi Arthur Okowa, CON, Your Excellency, Deputy Governor Barr. Deacon Kingsley Otuaro, for your revered presence, the State Executive Council for the approval of the staff of office, and all other government functionaries who played significant roles along the way.

“His Excellency, I also want to use this medium to appreciate your people oriented government for the laudable projects you have executed in my kingdom, such as the overhead bridge at Polobubou, the slipway at Ogbinbiri, water projects in all my major communities, renovation of health facilities, construction of school buildings, the recently approved two-kilometer Ogbinbiri/Ogbudugbudu road, and other projects”, HRM Amb. Meshack E. A. Ubabiri, Bini Pere IV said.

On behalf of the state government, the deputy governor, Kingsley Otuaro, said in his address that, “the cooperation that makes today’s event possible remains a perfection and confirmation of traditional rights and processes that mark the throne of the agadagba of the Egbema kingdom, I am pleased with the love and peace that accompanied all of the processes and proceedings because the kingdom has bestowed all of its hallmarks and confidence on him.

“Therefore, the Delta State government is using this medium to appeal to his royal majesty to maintain and improve the stature of his exalted office by leading his people to greater prosperity in an atmosphere of love, understanding, and mutual respect between the royal throne and the people of Egbema kingdom and beyond.

“I also urge you to be transparent while upholding justice, fair play, and equity in all your dealings with your subjects”, the Deputy Governor said.

He went on to admonish the King, saying that “In everything you do and in every decision you take, I employ you to place the interests of the majority of people and the fear of God above all other considerations.”

“Please ensure that you encourage the free flow of communication, dialogue, and consultation with all segments of the kingdom.

“As an age-old graceroot leadership institution, the government will continue to rely on the traditional rulers as a dependable medium for reaching their people”, Otuaro said.