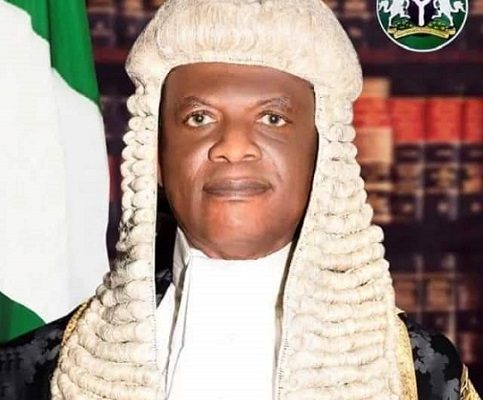 Governor Ifeanyi Okowa of Delta, on Wednesday, eulogised the late Supreme Court Judge, Justice Samuel Oseji, saying he was an incorruptible jurist and a man of unassailable integrity whose death was a great loss to Delta and Nigeria.

Okowa spoke at a “Night of Tributes” for the late Jurist held at the Court of Appeal, Asaba.

He said the Oseji died at a time when the country was in desperate need of men and women with unassailable integrity, adding that he left when his wisdom and services were most needed.

“On behalf of the Government and good people of Delta State, I commiserate with Dr (Mrs) Minnie Oseji, the Oseji family of Idumuje-Unor, the Supreme Court of Nigeria, and the good people of Aniocha North Local Government Area on the demise of Justice Samuel Chukwudumebi Oseji.

“My heart truly goes out to his beloved wife, the children, and the entire Oseji family for this sad loss; it was as shocking as it was unexpected.

“The late Justice Oseji was an adoring husband, great father and benevolent person. His exit has left a huge vacuum in the family he left behind.

“As we come to terms with the reality of his earthly departure, it is my prayer that the family will find comfort in the good life that he lived, a life worthy of emulation by all.

“Indeed, the best tribute we can give to him is to continue in his legacy of selfless service, compassion and fidelity.

“In my interaction with him over the years, I found in the late Justice Oseji a brilliant, conscientious, forthright, affable, warm and peace-loving person.

“He was a gentleman to the core and a man of great insight and noble disposition, and I always left his presence inspired and assured of the future of the judiciary in Nigeria,” he said.

The governor said that the late jurist lived a simple life in spite of his exalted office and numerous accomplishments.

“He lived a very simple life that is truly humbling, ever-willing to help others. His death is my personal loss as well, and I can only imagine the pain that his sudden exit has inflicted on his wife, immediate family, and all those whose lives he touched.

“His demise has robbed the Supreme Court of Nigeria of an eminent and incorruptible jurist.

“We are living at a time in the history of this country that we are in desperate need of men and women with unassailable integrity like the late Justice Oseji, to keep us on the straight and narrow way.

“It is so sad that he left us when his wisdom and services were most needed.

“His performance and judicial pronouncements, from his days as a High Court Judge in Delta State and Judge of the Federal Court of Appeal, helped in no small measure to shape the course of jurisprudence and the administration of justice.

“As Chief Registrar of the Delta State Judiciary, the late Oseji was renowned for his disciplined work ethics, unpretentious mien and leadership skills. He was a team player and very respectful of all, including his subordinates.

“The late Justice was a rare gem, a special gift to our generation and it is my prayer that God will give us more of the likes of him who will make us proud with their diligence, dedication to duty, probity, and commitment to excellence,” Okowa stated.

On her part, Chief Judge of Delta, Justice Theresa Diai, said the calibre of people gathered at the night of tributes attested to the character of the late Oseji.

“Late Justice Oseji made friends and enjoyed close relationship with people wherever he worked and he would be missed by all whose lives he touched in several ways,” she stated.

Welcoming guests to the ceremony earlier, Chairman of the Burial Committee, Justice Peter Obiorah, said that the late Justice Oseji was a well-endowered jurist of immeasurable value who left indelible footprints in the sands of time.

He commended Governor Ifeanyi Okowa for his support towards the burial of the deceased.

The tribute session was attended by the Deputy Governor, Mr Kingsley Otuaro; Minority Leader, House of Representatives, Chief Ndudi Elumelu; Speaker, Delta House of Assembly, Chief Sheriff Oborevwori, Justices of the Court of Appeal, among others.