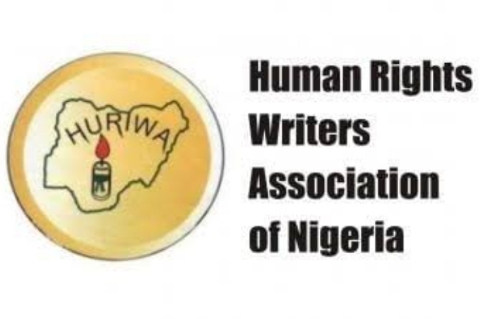 Civil Rights Advocacy Group, Human Rights Writers Association Of Nigeria (HURIWA) has described as spectacularly horrendous and unpardonable crimes against humanity the burning down of the Eke Ututu market and the bombing of Orsuihiteukwa Community in Orsu local government area of Imo State by the Nigerian Army.

The Group said it was unfortunate that such a state sponsored crimes are happening under the watchful eyes of elected representatives of the people even as the Rights group says those involved in this reprehensible genocide will face international justice mechanisms soon.

Besides, HURIWA said it is a travesty of international justice and a mockery of the United Nations system that at a time when massive human rights violations and use of extrajudicial killings are occurring in Orlu Zone of Imo state, President Muhammadu Buhari is sharing a podium with the rest of humanity at the United Nations General Assembly in New York.

In a media statement HURIWA stated that invading a community market and setting the entire place ablaze as recently done by operatives of the Nigerian Security forces in Orsuihiteukwa Community and the mass execution of some citizens are nothing short of a full blown genocide.

“It is a shame of unfathomable dimension on the United Nations that citizens in a part of Nigeria are being executed through extra legal methodology by the armed forces and the same United Nations that introduced the Universal Declaration of Human Rights in 1948 has offered a global speaking opportunity to the Commander-in –Chief of the armed forces that are committing despicable crimes against humanity.”

“We call on the United Nations Secretary General Mr. Antonio Guiterres to prevail on President Muhammadu Buhari to immediately stop the armed security agents in Orlu, Imo State from unleashing venomous crimes against humanity such as the burning down of houses of villagers and their markets and firing live ammunition on civilian residents thereby killing innocent citizens.”

HURIWA stated that such crude mechanism of setting fire on markets as was done in a part of Orlu senatorial zone of Imo State is absolutely offensive to the rules of engagement of the armed security forces and amounts to a violation of the constitutionally guaranteed fundamental human rights enshrined in chapter two of the 1999 Constitution of Nigeria.

HURIWA recalled that Bishop Augustine Ukuoma of Orlu Catholic Diocese had issued a statement Titled; “stop further killing of innocent people and destruction of livelihoods,” the Catholic Bishop warned that atrocities committed by Nigerian security agencies against the Igbo people in Imo communities describing as vicious and a calculated attempt to destroy the people and subjugate them to servitude.

“This exercise resulted in the death of some people and the burning down of Eke Ututu market which is the economic mainstay of the people of Orsu Local Government Area and other surrounding communities.

“I have severally in the past condemned the wasting of human life either by state or non-state actors. I still maintain the view, that human life is sacred and should be respected (Exodus 20:13.) Violence begets violence and the circle continues. Genuine dialogue remains the answer. My sincere condolences go to ALL families who lost loved ones during this painful incident. May the souls of these our brethren rest in peace.

“The burning down of Eke Ututu market has added another sad dimension to our existing bad situation. The inhabitants of this area are petty traders and subsistent farmers who live basically from hand to mouth. They go to the market to sell their produce and buy food for the day to feed their families.

“With this market destroyed and their means of livelihood dislodged, I am struggling to answer the following questions: What security threat did Eke Ututu market pose to the society?

“Did the perpetrators of this mayhem think of how many indigent people who depend on this market for their main source of livelihood? Did they think of the number of children who will have nothing to eat because their parents have lost their sources of income?

While he condemned the killings and the destruction, called for an unbiased investigation with a view to unravel those behind this atrocities and the real motive behind it.

“I strongly condemn the destruction of Eke Ututu market. The burning down of this market has negatively touched the very core of the existence of these people who may be changed to a life of misery given the present economic strangulation we are in.

“I appeal to government authorities to investigate this incident and take necessary steps to prevent reoccurrence. Finally, I appeal to all to remain steadfast in our prayer for peace in our region.”

HURIWA which backed the position of the Catholic Bishop of Orlu has asked the Church to expel the Imo State governor Hope Uzodinma from the Church since it is inconceivable that horrendous crimes are committed by soldiers with his approval but yet he goes to Church and is given the front row just as he is even assigned a priest to be with him in the government house.

HURIWA spoke also about the acts of depravity and criminality of the invading armed security forces violating the legally binding Rules of Engagement just as the Rights group reminded the military chiefs that Section 217 (2) (c) of the 1999 Constitution and Section (8) (1) and (3) of the Armed Forces Act, Laws of the Federation of Nigeria, (LFN) 2004 provide code of conduct and rules of engagement for the armed forces in internal security.

For instance, no officer or soldier must be found aiding or abetting any act of arson, vandalism or unprofessional conduct; and troops are duty bound to intervene in any situation to avoid a breakdown in peace, stability or law and order of an area where they are deployed.

Section 217 (2) (c) of the 1999 Constitution (as amended) provides that Nigeria’s armed forces shall suppress insurrection and act in aid of civil authority to restore order when called upon to do so by the President, Commander-in-Chief reinforced by Sect (8) (1) and (3) of the Armed Forces Act, Laws of the Federation of Nigeria, (LFN) 2004, it stressed that this presupposes that troops have to use necessary force to quell crisis resulting in deaths, injury and damages to properties.

The principle of minimum force and proportionality must be applied at all times; whenever operational situation permits, every reasonable effort shall be made to control the situation through measures short of using force, including personal contact and negotiations; the use of lethal force shall only be resorted to if all other means to control the situation have failed or in case of unexpected attack or suspected Improvised Explosive Device (IED) attack during which a delay could lead to loss of life or serious injury to personnel; and that any force applied must be limited in its intensity and duration; it must also be commensurate with the level of threat posed.

Force shall be used only when absolutely necessary to achieve an immediate aim; the decision to open fire shall be made only on orders and under the control of on-scene commander, unless there is insufficient time to obtain such order. Fire can however be opened if the life of a soldier, any law-abiding member of the public and/or property of which it is our duty to protect is in grave danger; fire must be aimed and controlled. Indiscriminate firing is not permitted.

Fire may be opened to forcefully stop any vehicle that fails to stop at a checkpoint or road block when ordered to stop for search; automatic fire will only be opened as a last resort; avoid collateral damage; after fire has ceased, render medical assistance and record details of incident both in writing and using audio/visual equipment whether or not casualty has been recorded; and whenever in doubt, seek clarification from higher headquarters.

HURIWA in the statement by the National Coordinator Comrade Emmanuel Onwubiko has also called on the human rights community in the South East to send petition against the Imo State governor and the military and security chiefs in Abuja to the International Criminal Court in The Hagues Netherlands so they individually face justice for these repugnant crimes of genocide.