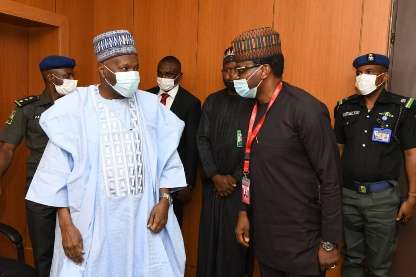 The Governor made the assertion when he played host to the Country Director of Mercy Corps, a USAID funded international humanitarian organisation that supports market actors with specific attention to youths and women.

Governor Yahaya expressed delight over the decision of the organisation to commence the implementation of the Rural Resilience Activity project in the north east with Gombe serving as its zonal headquarters.

He said rural resilience, which focuses on economic activities must be seen to trickle down to human capacity building in the area of high quality nutrition, education and infrastructure that will catapult the people towards realising their potentials.

The Governor said Mercy Corps could not have come at a better time than now when the world is faced with the novel coronavirus pandemic, adding that the state will need the technical support of the organisation to curb the spread of the covid-19 virus and strengthen its safety net.

While assuring the organisation of safety abd security of its staff and facilities, the Governor said inspite of the challenges facing the North East, the government of Gombe State has been able to maintain peace largely to the understanding and security consciousness of the people.

Governor Yahaya said due to the environmental limitations of the Gombe, the State needs all the partnerships it can get to restore land degradation and vegetation so that plants and animals can produce optimally.

“Unless we can provide space for people to produce and produce economically, the rest of the social activities that go through either commercial in terms of trading or value Chain utilisation in processing, marketing and distribution may not be possible”.

The Governor said assured that administration will partner Mercy Corps and is ready to sign a memorandum of understanding on activities that are tailored towards the good of the people.

Earlier speaking, the Country Director of Mercy Corps, Ndubuisi Anyanwu explained that his organisation is a leading humanitarian agency that is working in forty countries of the world to address the devastating impacts of conflicts and fragility.

He said since 2012, Mercy Corps has been working in Nigeria in many of the difficult regions to strengthen resilience and promote development particularly in the north east.

He said from his short experience with the government and people of Gombe, the state is a prime candidate for collaboration that is people oriented.

He said the project is aimed at facilitating economic recovery and growth in vulnerable, confident affected areas by promoting systemic change in market systems.

According to him, the activity that would be carried out in the north east will lift over 90,000 households from poverty with Gombe, Adamawa, Borno and Yobe as beneficiaries.