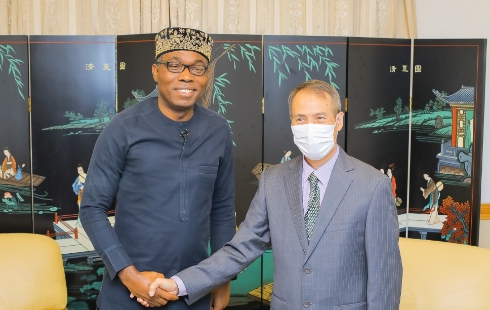 Prince Adewole Adebayo, the presidential candidate of the Social Democratic Party (SDP) has listed various ways in which Nigeria can work with China towards improving bilateral relations. He spoke on Thursday, 30th September, during a diplomatic engagement with the Chinese Ambassador, HE, Mr. Cui Jian Chun at the Chinese Embassy in Abuja.

Prince Adebayo noted that the belief of the social democratic party is that international relations of Nigeria must focus on countries like China who have become self-dependent after some years of underdevelopment, adding that these are countries Nigeria can learn from.

“China has been an example of how a developing country or what use to be an undeveloped country can within a short time rally its people together, become self-dependent, become a great power and our believe in the Social Democratic Party is that the international relations of Nigeria must focus on countries with similar experience, countries we can learn from”.

Still speaking, he says Nigeria and China can work together in creating more fairness and equity in the international system, in creating a balance in international trade relations, in the area of infrastructure development and also medicine, science and tech.

“China is world champion on infrastructure development, road, railway and port development and I think we have a lot to learn in terms of that.”

In the area of trade relations, Prince Adebayo says, “we believe that trade should be more balanced and countries of the southern hemisphere and other developing countries should be able to explore other payment systems”.

While welcoming the SDP presidential candidate and his entourage, the Chinese ambassador, Mr Cui Jian Chun says SDP is a well-respected party in Nigeria.

“You are welcome once again. Your party is a well-respected party in Nigeria. In China, whether small or big, every party is equal.”