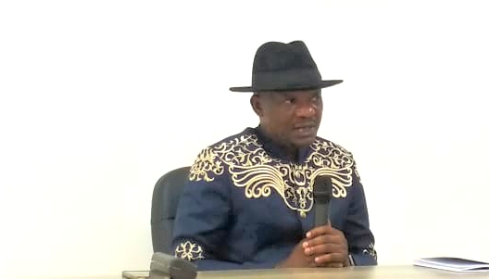 Delta State Government on Sunday said social media report on fire incident at the Stephen Keshi Stadium, Asaba was blown out of proportion.

The State Commissioner for Information, Charles Aniagwu while speaking to news men at the venue said the alleged fire incident did not affect the stadium complex but condemned roofing sheets removed from the building.

Aniagwu said the fire was not caused by electrical connection or picture of any presidential candidate as mischievously reported by the man who recorded the video in circulation.

He cautioned that Social Media was supposed to be a means of adding value to the information value chain and warned against using it to score some cheap political points. 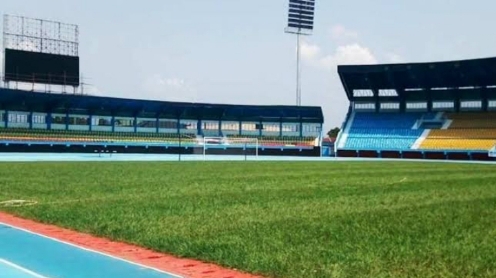 According to him, the fire was caused by the drop from the welder’s electrode which fell on the condemned roofing sheets on the ground.

“I told you a few days ago that we are undertaking some renovation works in this facility and while the welder was very busy working upstairs, the electrode that was actually more like a spark coming from the iron fell on the condemned roofing sheets on the ground and it caught fire.

“The fire did not affect the stadium itself but unfortunately the heat that emanated from the fire melted some of the cladding on the wall of the stadium not that the stadium (Stephen Keshi Stadium Asaba) itself caught fire.

“It is the condemned roofing sheets that was removed from the roof which has become more like a waste and was yet to be evacuated from the premises of the stadium.

“While the welder was very busy welding upstairs, the electrodes from the welding activity fell on the condemned roofing sheets and in the course of time the heat from the fire melted some of the cladding on the wall not that the stadium itself caught fire.

“The fire was extinguished by the workers on ground even before the arrival of the state fire service,”

He appealed to Deltans to shun churning out evil propaganda as it does nobody any good.

“Evil propaganda does not pay anybody any good. We do know that we are in the period of intense politicking but to begin to wish the state evil does not in anyway give us result.

“I say so because the nature of propaganda emanating from a lot of activities in recent times is becoming alarming.

“The man who filmed the smoke from afar was shouting that the picture of a particular political party was responsible for fire, since when did posters become fire or matches such that once it’s pasted it sets the place ablaze?

“The time he should have used in assisting to put out the fire he was busy using it to play politics.

“It is important to note that once the state successfully hosts the National Sports Festival it is to the glory of everybody in Delta.

“Delta will benefit from transportation, entertainment, tourism and many other things associated with hosting events of that magnitude,” Aniagwu said.

He pleaded with Deltans to shun politics and support the state government in its efforts to host world class sports festival.

“As much as social media is wonderful and desirable, individuals must not continue to deploy it for negative reasons because the way it was reported is not what happened,” he added.