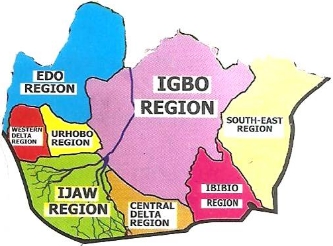 The taste of the pudding, goes an English adage, is in the eaten. Sweet as it may taste, this one, Nigerians have refused to even smell so as not to be tempted to lower it into our mouth. The pudding of Igbo Presidency!

Across board, the performance of Igbo political class has been rather abysmal, though there are some exceptional individuals among them who have given a good account of their stewardship.

The best among the most industrious tribes of our country are found in productive sectors, away from political leadership and governance. Inspite of this, the effect of bad governance are seen through infrastructural decadence in the South East.

In contrast it is the toga of poverty hanging on several millions outside of the region who of course still have infrastructural challenges to contend with.

We need not relive the ugly scenes of the civil war and the trauma the memories will serve. But the civil war has turned out to be a blessing in disguise to the Igbo nation. They came out of the war penniless.

Without taken into account what their bank balance were before the war, the Federal Government who needed to slow pace them, handed a paltry 20 pound sum to them to start their lives.

They stepped out of the war armed with an uncommon wisdom to build themselves back. It came in Igbo Trade Apprentice System (ITAS); a formal and informal indenture agreement between parties that ultimately facilitate burgeoning entrepreneurial communities within the Igbos.

The system is the best business framework known to humanity world over today. Necessity they say, is the mother of inventions! A people stripped by war found a means of reinventing themselves in ITAS.

ALSO READ  The Forces Of Change Occasioned By The Lord In Whom We Live, Shall Prevail Beyond All Odds

In the word of Professor Ndubuisi Ekekwe, under the system, “no one is super-rich but everyone is just fine and the players just like it that way because “onye aghana nwanne ya” (never leave your brethren behind) is part of the culture.

Unfortunately, the Nigeria family seems to have left a most needed member of the family out of the core leadership mandate.

None of the other tribes is better prepared for leadership like the Igbo person who sees hope in himself and the environment wherever he finds himself.

Armed with nothing other than his transport fare, a young Igbo man is willing to venture into any field of business and navigate it to apparent success.

How come their best are not given governance considerations neither are we allowing this resilient virtue mostly needed for the season we find ourselves to led the rest of us who have left the nation stranded?

The Igbo are deft in culture and traditions. This highly industrious people are republican in nature, hence the diversity they bring to leadership and followers relationship orientation of our nation, reason for which they are often misunderstood.

Nigeria is said to be the poverty capital of the world. This national poverty however is more pronounced in the region that has produced Military Heads of State and democratic Presidents than any other region.

The North has nothing to show for its many years in leadership saddle than millions of her own sons and daughters left at the mercy of abject poverty.

It’s an irony that the region that has been practically excused from leadership since coming out of the war, not minding the deliberate policies of the Government at the centre to marginalize them, have continued to thrive and are today the region with the lowest population of poor people in the country.

We, as a nation, can’t keep hiding from the truth. The Igbo presidency may be the messianic tribe to which we must look in our search for that leadership we truly desire.

The people less endowed with natural resources, limited land mass, yet has found a way to lift her own out of poverty and keep them away from it, in all honesty should be given a chance in our search for productive leadership in 2023.

The proverbial Messiah that will liberate our country out of the clutches of poverty may be among the people we are afraid of giving a chance for no justifiable reason.

The Igbo have a commendable social rewarding system which bestow nobility on their hard working daughters and sons. Away from Chieftancy titles which can be influenced or even bought are “Iyom” for women and “Mazi” for men.

We owe it a duty to extend our hands of fellowship to the Igbo nation to bring forward to leadership not the renege of political class but the noblest of their technocrats to lift our nation out of the woods.

The confrontational approach of IPOB not withstanding, the Igbo deserves a shot at the Presidency. This I believe all well meaning Nigerian will support if they can up their political skills.

The agitation of MASSOB, though more refined than that of IPOB, both should be accommodated.

A people so dealt with the way the Igbo nation has been since the war ended, has the right of expression and if not attended to may grow into militancy as we witnessed in the South South or terrorism as we are presently confronted in the North East.

The Igbo must also come to terms with the futility of violence in a constitutional democracy where power game is involved. Negotiation is key.

They shouldn’t sit back expecting aspirants from other regions to cash influence them, but rather set up a political model, of the template that has made them the tribe to beat in the world of business, for the field of politics to achieve Igbo presidency.

Inequalities all over the world breeds insecurity. Our country, with very challenging insecurity situation resulting from same, should keenly look at the resilience of the Igbo nation to fight through odds and seek a proven competent hands to lead the rest of us.