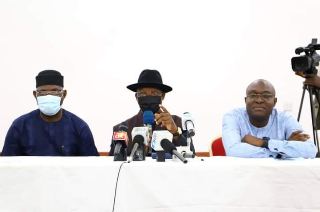 Delta State Government on Tuesday approved the commencement of a new cycle for the Rural Youths Skill Acquisition (RYSA) and the Girls Entrepreneurship and Skills Training (GEST) programmes.

Commissioner for Information in the state, Mr Charles Aniagwu announced the approval at a post exco press briefing at Government House, Asaba.

Aniagwu who was flanked by his Youths Development counterpart, Comrade Ifeanyi Egwunyenga and Chief Press Secretary to the Governor, Mr Olisa Ifeajika, stated that the approval followed Governor Ifeanyi Okowa’s desire to upscale the number of intakes for the various job creation programmes.

The Commissioner noted that the challenge of laterites flowing from Okpanam have been largely checked by the construction of several roads and adjoining streets in Asaba and Okpanam.

The Street Reporters Newspaper reports that 900 girls are expected to be empowered under the project GEST while 810 youths are being targeted under the RYSA programme.

ALSO READ  Tunisians Vote in Second Round of Parliamentary Elections

“The approvals touched on human capital development as well as development of infrastructure and other issues that affect the lives of the people of the state.

“We have made a lot of impact since we revamped the 6 existing technical colleges with the construction of additional 9 new ones.

He stated that the essence of the recent approvals was to further deepen the state government’s job creation programme with the aim of bringing it closer to the people.

“More importantly in the RYSA Programme, the community business school, the mindset and value reorientation is to ensure that the starter packs are put to productive use.

“The Governor’s drive is tied to sustainability of the job creation programmes and we have had a collaborative effort with all MDAs on training processes and provision of starter packs.

“Very soon the RYSA programme and the GEST programme will roll out for another cycle,” Egwunyenga said.