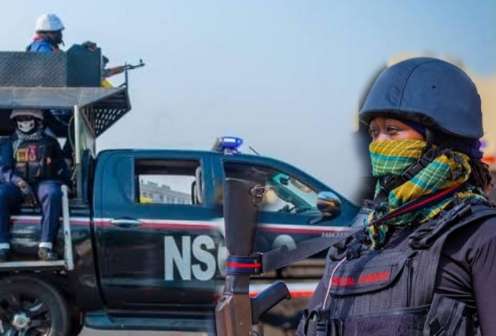 Nigeria, And Those NSCDC Officers

The first thing to go is his empire. The market crashes; his assets tumble. What is liquid goes dry. What has been up goes down. Stocks go flat, and Job goes broke. There he sits in his leather chair by his soon- to-be-auctioned-off mahogany desk when the phone rings with news of calamity number two: the kids were at a resort for the holidays when a storm blew in and took them with it.

Shell-shocked and dumbfounded, Job looks out the window into the sky that seems to be getting darker by the minute. He starts praying, telling God that things can’t get any worse… and that’s exactly what happens. He feels a pain in his chest that is more than last night’s ravioli. The next thing he knows, he is bouncing in an ambulance with wires stuck to his chest and needles stuck in his arm.

He ends up tethered to a heart monitor in a hospital room, his only companion the beeps and alerts of medical machines.

Not, however, that Job lacks for conversation.

Then there are his friends. They have the bedside manner of a drill sergeant and the compassion of a chain-saw killer. A revised version of their theology might read like this: “Boy, you must have done something really bad! We know that God is good, so if bad things are happening to you, then you have been bad. Period.”

Does Job take that lying down? Not hardly.

“I’m not a bad man,” Job argues. “I paid my taxes. I’m active in civic duties. I’m a major contributor to United Way and a volunteer at the hospital bazaar.”

Job is, in his eyes, a good man. And a good man, he reasons, deserves a good answer.

Job reminds me of the Nigerian security personnel, in whatever uniform, and service to the nation, Job’s life echoes it, a group of people who deserve our praise, our compassion and more, and despite the bad eggs amongst them. How do we really treat them, on this year’s Remembrance Day, do we remember them?

Nigerians are short fused, they learn slowly and forget very quickly, we are never fixated on any real problem, we either never remember or we choose to totally forget, a country of scattered rains, with no staying power, to push through an issue or go through substance, our strength or determination to keep going until we reach the end of any matter is lacking. Everything is about one narrow leaning or the other. And may I again state a people that major in minor and the reverse…

Our case like the, “Mocking bird, you are accused of insulting the king.” It asked when would it have time to insult the king, seeing that it must sing two hundred songs in the morning, two hundred in the afternoon, and two hundred at night, mixing it all up with some frolicsome notes?

Reporting on the 22 of November 2018, News agency Reuters quoting sources said that Militants killed around 100 Nigerian soldiers in an attack on an army base. The insurgents attacked the base in the village of Metele in north-eastern Borno state, the epicentre of a revolt by Boko Haram and its Islamic State splinter group.

Four years earlier, it was Kabiru, and on this occasion it was Lt. Col. Sakaba and other gallant soldiers. And this January 2023 twelve security personnel (7 Civil Defenders) paid the price at the Kuriga mining site in Birnin Gwari LGA of Kaduna State.

Before I go far, let me say that in all the battles and warfronts, the Nigerian armed forces, the police (which these days are awol), the Department of State Security, Civil Defenders, Prisoner Officers and other security personnel have been compromised. There are moles, double agents etc, so a hard task is made even harder.

As these men are killed their kids are left without a father, loving wives are widowed, parents lose their sons. Families’ grief, the nation is losing humanity but we care less, choosing to focus on the feisty irrational hateshop of a “general election”. I recall when Col. Salisu was killed, as a Muslim, on his phone the status read—The originator of heavens and earth. When he decrees a matter. He only says unto it. “Be-and it is”. If only we know this singular fact.

Men who already fatigued, spending countless days on combat uniform. We might say they signed for it, but these are the heart of our security apparatchik being cut off in their prime.

Strangely I dare say because many of us never knew these fine gentlemen, soldiers and officers. We just don’t care much.

Many of these men loved their job, and loved the nation. They have paid the ultimate price, Muslims, Christians, pagans inclusive…they died so that you and I reading this can live.

I have been opportune to see how poorly armed these men and officers are. Yet they fight on, we have issues of poor allowances; we have reported delays running into years before benefits are paid to families of deceased officers. As it was ala-Jona, not significantly much has changed with the Buhari era, and the next one and next one…

It is rather sad that in the midst of all these killings, Nigerians are battling each other along religious and ethnic lines. Like the Mocking bird making unnecessary excuses and noise.

I would end with these words on marble by late Alh. Nurudeen Lemu, of the Supreme Council for Islamic Affairs “Every ethnic group is an oppressed minority somewhere. Every group is a religious and ethnic minority somewhere. Every majority or settler is an indigene somewhere. In one way, we are all settlers; we just don’t remember where we came from or why we came. But ultimately, we are all visitors to this planet, from God we come and to Him we return.”

Again, “On behalf of a grateful nation, the family of all those wardens that were shot during prison breaks, DSS officers that were killed years ago in Nasarawa, that dude that was killed in Niger, the ones that were killed in Taraba, Col. Kabiru, Lt. Col. Sakaba, Civil Defense personnel and all our gallant troops who lost their lives in the line of duty, service of the nation and protecting people of Nigeria- please accept our deepest and most sincere condolences and know that the entire nation is with you in this dark hour and that we will never forget your loved one’s honorable and faithful service – thank you…for your efforts—time will tell.

Previous PostAkokwa Mayhem: Imo Now Animal Kingdom Where Life Has Become Endangered, Nasty, Short And Brutish Next PostHow You Could Enslave Yourselves With Your PVCs - SDP Presidential Candidate, Adebayo, To Nigerian Voters