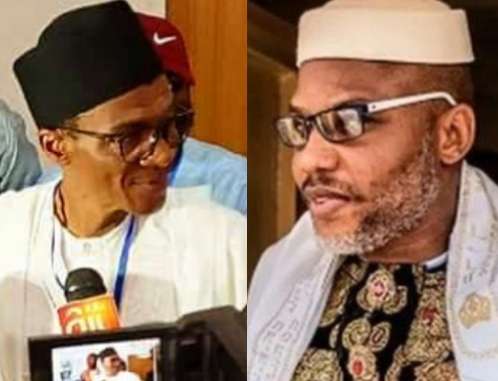 The Coalition of Northern Groups (CNG) has reiterated its warning that the renewed pressure by Igbo leaders for the unconditional release of leader of the proscribed Indeginous Peoples of Biafra (IPOB) is unreasonable and a recipe for greater conflict.

Reacting to recent calls by the Council of Elders of Ohanaeze Ndigbo, Worldwide, and the Anambra State Governor, Prof. Charles Chukwuma Soludo for Nnamdi Kanu to be released without trial, CNG Spokesperson, Abdul-Azeez Suleiman said the Federal Government should discountenace any such calls to avoid setting dangerous precedence in the country.

The Igbo leaders after a meeting in Abuja on Friday, said it is planning to organise a peace summit to discuss ways of addressing insecurity in the country and the South-east especially and the desire that Nnamdi Kanu should be released.

“The council took a decision on the need to have a peace summit. It goes with the desire that Nnamdi Kanu should be released,” the Igbo council said in a communiqué issued by its Chairperson, Emmanuel Iwuanyanwu,
“We want to dialogue with his participation in order to have an enduring peace in Nigeria, particularly in the South East.

“The council therefore called on the Federal Government and all persons concerned to release Nnamdi Kanu unconditionally. He cannot be in prison while such a crucial summit is being held,” Mr Iwuanyanwu said.

He added that the security situation in the country called for concern, saying that the council was particularly worried how the situation had worsened in the South East.

Mr Iwuanyanwu noted that lives were being lost, innocent blood shed, while properties and government institutions were being destroyed.

“Moreover both the State and Federal Government are deploying huge financial resources in fighting a meaningless war instead of providing infrastructure, education and healthcare.

In a sharp reaction, the CNG said it is unpatriotic and unreasonable for leaders to openly shield IPOB and other authors of mindless violence and separatism who see it as their duty to actualise what their fathers started in 1966, namely to bring about the realisation of a separate State of Biafra through the force of arms and terrorist tactics.

“Today, everyone can see that the diabolical scheme planned and exhibited in the actions and clamours of IPOB, supported morally and politically by the vast majority of the pliant and affrighted Igbo elites, politicians, traditional rulers, business persons, and the larger population of this ethnic group that has pushed Nigeria to the precipice.

We are convinced that this renewed determined pressure from the Igbo leaders is part of a wider plot to see through the secession of the South-East from Nigeria to is now real and cannot be avoided or deferred any longer without terrible consequences.

“As the representatives of various interest groups from Northern Nigeria, the CNG has watched and studied these events carefully and with considerable restraint and maturity, to the point of condoning and accommodating several unreasonable and unacceptable actions that have been perpetrated against Nigerians collectively, and northerners in particular.

“Of late however, the calls for the unconditional release of Kanu have pushed matters to a point whereby silence has become complicity and inaction no longer an option with unprovoked evictions, attacks and killings of northerners in various parts of the South-east resulting from the hate campaigns and propaganda being conducted by regional and ethnic agitators solidly backed by their leaders,” Suleiman said.