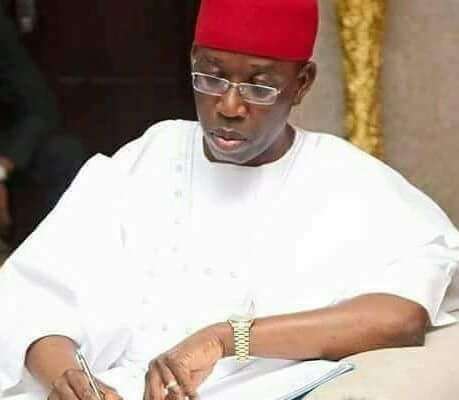 …Appeal to Okowa to complete the Delta State Polytechnic, Elume

Prominent Okpe leaders on Saturday descended on the Orodje of Okpe Kingdom, Orhue 1, accusing him of plotting to destroy the union of the ancient kingdom.

They also called on politicians and other stakeholders to zone the 2023 governorship of Delta State to the Okpe Nation.

‘’The Okpe Nation has played a continuous uniting role and stability of the state. There are notable Okpe personalities in the government and politics of Delta State that are qualified and loved by the people of the different ethnic nationalities of the state’’

At a press conference in Lagos, the leaderssaid there were no doubts as to whether the Okpe Kingdom would produce the next governor of Delta State.

‘’It is unconstitutional, illegal, and void’’ the leaders said.

They unanimously passed a vote of confidence on the current National Executive Council of the Okpe Union led by Mr. Patrick Akpotor and extended the tenure of the current leadership for five months to enable it conduct a credible free and fair election in compliance with the Okpe Union constitution and the wishes of the majority of Okpe people.

‘’The Okpe Union 2020 National conference considered the state of the Okpe Union and recent developments regarding the purported dissolution of the elected national leadership of the Union including imposition of an interim committee of the Okpe Union. The conference noted that the Okpe Union, being a registered organization under the Lands Perpetual Succession Ordinance of 1924 and thus under the Corporate Affairs Commission, is an autonomous organization with its constitution and under Nigerian federal laws that govern incorporated non-governmental organizations.

The leaders explained that there was no cause to panic as the Executive Committee would tackle the challenges facing the union.

Particularly, the leadersnominated and adopted 15 Okpe personalities to be recommended to the Corporate Affairs Commission for registration as members of the Board of Trustees.

The leaders applauded the peaceful nature of all Okpe people.

The leaders appealed to the Federal Government to reward the Okpe people, being one of the highest oil and gas producing ethnic nationalities in the Niger-Delta.

They also asked the Federal Government to transform the Sapele Technical College, one of the oldest in Nigeria to a Federal University or Polytechnic to create capacity in the teeming youths of the area and generate employability.

The leaders called on the Delta State government to complete the Delta State Polytechnic, Elume, Sapele which construction commenced during the administration of Dr. Emmanuel Uduaghan.

‘’That Prof. Emurobome Idolor and Prof. Kenneth Eni who are the only Okpe Union members amongst the imposed Interim National Executive Council are hereby suspended indefinitely from the Okpe Union’’

The Conference also nominated and adopted a five-man Electoral Committee to organize elections into the National Executive Council of the Okpe Union within five months from 14th November, 2020.