Gombe State Governor, Alhaji Muhammadu Inuwa Yahaya has inaugurated an 11- member commission of inquiry to investigate allegations of human rights violations by the disbanded Special Anti Robbery Squad, SARS and any other Nigerian Police Unit or security agencies in the State. 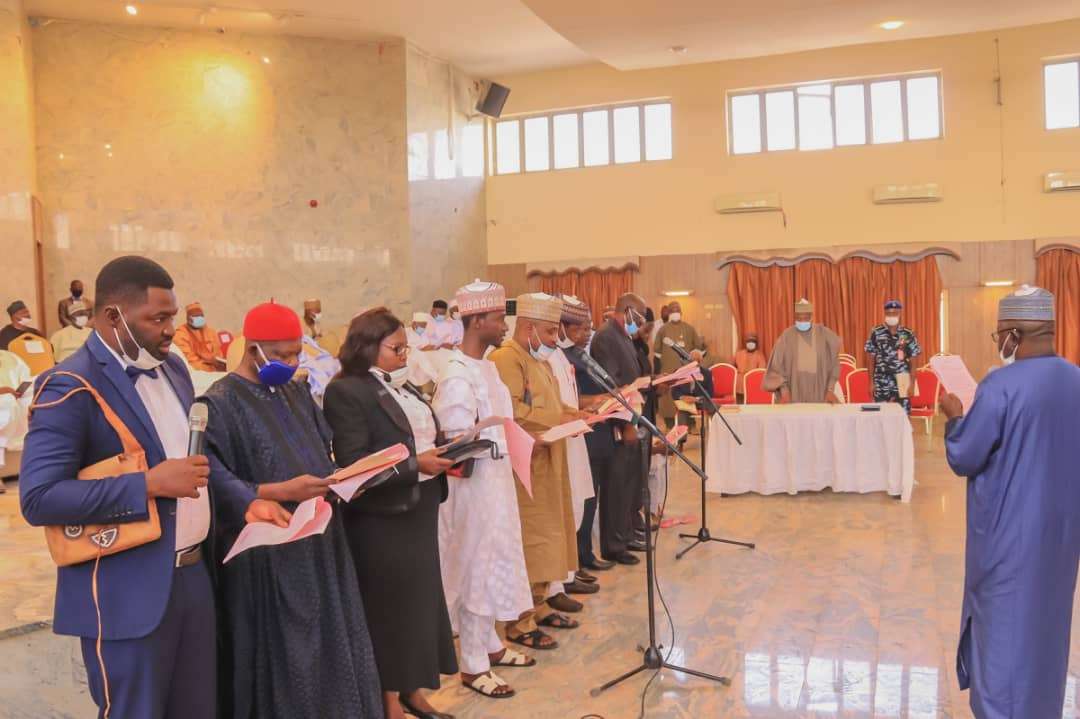 Members of the Panel

The panel, which draws its membership from Human Rights Commission of Nigeria, Youth Council of Nigeria, Legal Field, Civil Society Organisations and Students’ Union has a retired High Court Judge, Justice Sa’ad Mohammed as its chairman.

In his speech during the inauguration ceremony at the Government House, Governor Muhammadu Inuwa Yahaya said the setting up of the Commission of inquiry was in exercise of the powers conferred in him by section 2 of the Commission of Inquiry law cap 33 laws of Bauchi State 1991 which is applicable to Gombe State.

He said events of past few weeks have drawn considerable attention to the issues of human rights and responsive civil policing in Nigeria, noting that what began as a genuine protest against human rights abuses and alleged police brutality was hijacked by criminal elements who sought to exploit the grievances of the youths.

He said inspite of the challenges facing the Nigerian Police, the Force has been playing an important role in the preservation of law and order with its officers and men gaining commendation from within and outside the country.

Governor Inuwa Yahaya said “the Special Anti Robbery Squad, SARS which was established by the Nigerian Police Force in order to arrest the raising cases of armed robbery and criminality across the country did well in the discharge of its responsibilities but that cases of human rights abuses, extortion and extra judicial actions perpetrated by some personals of SARS put a huge dent on the reputation of the Nigerian Police”.

He however observed that inspite of those challenges, Nigerians must not fall into the temptation of throwing the baby with the bathwater.

The Governor said “the decision by the Federal government to disband the Special Anti Robbery Squad SARS is a welcome development, it is a demonstration of our commitment to a total reform of the Nigerian Police Force under the leadership of President Muhammadu Buhari”.

“It is necessary for the police to be manned by men and women of strong moral character, integrity and patriotism”, adding that “the abuse of human rights and extra judicial actions has no place in a genuine democracy”.

He noted that as a people- oriented government, his administration is committed to the protection of lives, property and dignity of the people of the State.

He commended the youth in Gombe as well as community and religious leaders for their roles in promoting peace and harmony and also appreciated the security agencies for maintaining mental alertness while the crisis lasted.

“So far our youths have been remarkably calm and responsible preferring to channel their energy towards dialogue instead of rioting and destruction of lives and property of the people”.

The Governor said while setting up the Commission of inquiry, Government was careful in the choice of its membership to include men and women of proven integrity and representing various interest groups in the State.

He called on the citizens of the State whose rights where violated by men of the disbanded SARS, police units and other security agencies to approach the panel with a view to seeking justice.

“I encourage anyone who has a genuine complaint involving human rights violations to appear before the Commission. While I urge you to present complaints that are well grounded and supported by credible evidence, you must not turn this exercise into an avenue to witch-hunt security personnel or settle personal scores.

“I call on private legal practitioners, human rights activists and civil society organisations to make their services available to victims that have complaints to present before the Commission. On our part, I want to assure members of the public that our administration would implement the recommendations of the Commission when concluded”.

Chairman of the Commission, Retired Justice Sa’ad Mohammed thanked Governor Muhammadu Inuwa Yahaya for the confidence repose in them, assuring the Governor that Commission of inquiry will discharge its assignment without fear or favour.

I. to receive and investigate complaints from victims or the families of victims and members of the public of allegations of human rights violations by personnel of the disbanded Special Anti-Robbery Squad (SARS) and any other Nigeria Police Unit or security agency in Gombe State;

II. to identify personnel of the disbanded Special Anti-Robbery Squad (SARS) and any other Nigeria Police Unit or security agency in Gombe State responsible for violating the human rights of any person;

III. to recommend to appropriate Federal or State Government agencies appropriate sanctions, punishment or other penalties to be imposed on any personnel responsible for violating the human rights of any person in Gombe State;

V. to recommend to appropriate Federal or State Government agencies for compensation, restitution and other remedial measures for victims of human rights violations;

VI. to make appropriate recommendations to the State Government on measures and means of preventing the future occurrence of acts of violation of human rights by personnel of Nigeria Police Force and other security agencies in Gombe State, and how to make the violators accountable for their acts;

VII. to ascertain whether any of the victim of the alleged acts of violation of human rights committed by personnel of the disbanded Special Anti-Robbery Squad (SARS) is being held in detention or custody and the identify of such victim as well as place of detention; and

VIII. to make such other or further recommendations as the Commission may deem fit.

Barrister Caleb Ubale shall serve as Counsel to the Commission.

The Commission shall have six months from today to submit its report to the Government, while the venue for its sittings shall be the Jewel Hall, College of Nursing and Midwifery Gombe.

[…] was said to have met President Kwame Nkrumah of Ghana, through the Ghana High Commission and started to work for his government in area of public […]