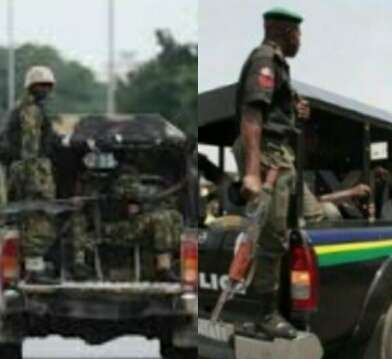 The International Society for Civil Liberties and Rule of Law (Intersociety) has said that the organisation has followed, monitored and assessed the activities of deployed soldiers of the Nigerian Army and personnel of the Nigerian Navy in Anambra State following rising cases of violence, “particularly recent attacks on security personnel at extortion points and jihadist and other violent activities of the Fulani Herdsmen in different forests, bushes and farmlands in the State including the Aghamelum forests where the defenseless President General of Omor Community, also a legal practitioner, was abducted alongside five others and later murdered.”

The Onitsha based human rights group noted that “the killing of security personnel at their extortion points and indiscriminate arrest, detention, abduction, torture and killing and maiming of defenseless citizens by soldiers and police and naval personnel are all strongly condemned.”

Also followed, monitored and assessed was the reaction and action of the Government of Anambra State and Governor William Obiano who is the State’s Chief Security Officer, the Intersociety said.

According to the body, “the Governor has in his reaction raised security alert or alarm and announced some measures to checkmate the violence including deployment of more troops such as solders and personnel of the Nigerian Navy.

“He also announced ‘special military operation and banning of tinted glasses and so on’.

“We therefore make bold to say that loopholes abound in the entire state actor arrangements, pronouncements, responses and conducts.

“While Gov Obiano was right in raising security concerns, deployment of military was a blunder of the highest order and unprofessionally thoughtless.

“Anambra State’s present security challenges are not ‘a battlefield affair’ where guns are corked and shot at and it has been said time and time again that soldiers and personnel of other branches of the Nigerian Armed Forces are only trained to ‘cork and shoot rifles with zero knowhow in criminal intelligence, detection, enforcement, investigation and prosecution; and as a matter of fact, soldiers and other military personnel interlopers.

“Criminal intelligence and detection is the key to unbundle violent crimes and fishing out their offenders.

“These explain why soldiers have failed and still fail woefully when assigned during which such operations are converted into ‘duplicated crimes and atrocities’ including perpetration of heinous rights abuses such as ethnic and religious profiling, property looting and robbery, unlawful arrest and detention, abductions and disappearances, torture, extrajudicial killings, maiming and rape and other forms of sexual violence.

“The Obigbo massacre, abductions and sexual violence are a clear case in point”, the Intersociety said in a statement signed by its principal officers led by the Board chairman, Emeka Umeagbalasi.

We have received and still receive verified reports concerning the nefarious activities of the deployed soldiers and personnel of the Nigerian Navy.

These include blockade of urban roads and streets and harassment and torture of innocent and defenseless citizens including nursery/primary school children and secondary school students and their parents and guardians as well as traders, civil servants and intra and interstate travelers.

The Onitsha Niger Bridge-Asaba left Service Lane is totally blocked, as we speak, with bags of sand, compounding the daily terrible gridlock at the aging Niger Bridge.

Passersby including traders, students and interstate travelers are routinely flog-jumped, harassed and tortured including forcing them to raise their hands as if they are ‘prisoners of war’.

At Uga Junction Navy Checkpoint down to its St Gregory and Okpotu Uno locations in Ogbaru, the area is turned into war and torture scene, forcing commuters and residents to trek for five kilometers to access their working, schooling and residential destinations or environments.

Similar reports have been received from Owerri Road by Enamel Ware and environs as well as community link roads and market squares in places like Umunze, Ekwulobia, Achina and so on.

The situation gets worse at dawn, same time citizens are routinely abducted to unknown destinations and young women among them sexually harassed or raped as was recently the case in Obigbo-Rivers State.

Intersociety will therefore not be surprised to see or hear the flooding of the media with military censored stories of “killing by soldiers of dozens of IPOB-ESN members in gun battles in Anambra”; whereby in reality the victims will turn out to be scores of innocent and defenseless citizens abducted by soldiers and naval personnel.

It therefore saddens our heart that apart blundered deployment of soldiers and personnel of the Nigerian Navy to Anambra State, the deployed military personnel have abandoned where they are needed, if at all, and channeled their weapons and brute soldiering to innocent and defenseless citizens of the State.

At Uga Junction Naval Checkpoint, for instance, between five and ten passersby are tortured and dehumanized daily.

Apart from forcing all passersby to raise their hands as ‘prisoners of war, victims caught for petty infraction or pedestrian mistakes or answering important and emergency phone calls while passing by are routinely stripped half naked and forced into a tiny pit at the center of the Checkpoint under scorching heat and other inhuman conditions.

Contrarily, in Aghamelum Forests, held hostage and riotously by the Army aided jihadist Fulani Herdsmen where a Lawyer-PG of Omor was recently abducted alongside five others and later murdered, the deployed soldiers and naval personnel are looking the other side.

This is more so when the ‘unknown gunmen’ that launched attacks on security personnel at roadblock extortion points are members of organized violent syndicate and not defenseless citizens including nursery/primary school children, secondary school students or traders and civil servants residing or working or schooling in urban areas.

In other words, while the criminal citizens are left off the hook, the innocent are being chased about, brutalized and abused.

In Okija Community located in Ihiala Local Government Area of Anambra State, not only that dozens have been killed since Nov 2020 with Government of Anambra State and security agencies doing little or nothing including taking sides, but also the Community is now a center of violent cultism and terror including frame-ups, killings, maiming, abductions, alleged ritualism, armed robbery and sexual offenses include rape.

The Anambra State Police Command is so incompetent and partial that its only major role in the mayhem is to ‘collect some corpses of the slain and deposit in mortuaries’. The genesis of the ongoing Okija cult mayhem and terror requiring special policing intelligence, detective and law enforcement operations, as well as in Aghamelum Forests, is traced to the activities of some ‘Troublesome Billionaires’ including communal land grabbing.

Dating back to over 2010, some persons had gone after communal lands in manners strongly suggesting forced procurement or forced possession, forcing their communal owners to rise in opposition.

With polarization of the Community’s Town Union leadership and Chieftaincy Institution and glaring partiality of the security agencies and the Government of Anambra State, the dispute escalated to violence, maddeningly reaching its peak since Nov 2020-with the importation of cultists and rivals others which led to the present mayhem.

Today, dozens involving imported cultists and locals have been slain with some having their throats and heads sliced. At least ten of the slain bodies have been recovered and buried by their families and there are disappearances of scores of others suspected to have been buried secretly to evade traces or disappeared for purpose of suspected ritualism.

And out of all the named, at least five have become the center of the ongoing killings and they are Oghelegbu, Umuogu, Umuhu, Umufor and Ubahu. In this outgoing week alone, no fewer than eight citizens have killed in the Community, with four persons slain on Tuesday and two each on Wednesday and Thursday.

We hereby strongly call on the Government of Anambra State and Gov William Obiano as the State Chief Security Officer and the authorities of the Nigeria Police Intelligence and Criminal Detection or Force CIB and Force CID to rewind and do the needful by applying the commensurate tactics in unraveling and bottling the violence in the State.

It also appears to us that the Government of Anambra State and the State Police Command are taking sides concerning the attack, abduction and murder of the Omor PG and abduction and possible killing of five others. It further appears that the State Government and the State Police Command are looking the other side in matters of Fulani Herdsmen’s jihadist violence in the State’s forests, bushes and farmlands but dissipate more energy and spend more resources in looking for “imaginary violent criminals” who turn out in the end to be innocent and defenseless citizens of the State.

It is not only that the deployed soldiers and Naval personnel must be directed to unblock Anambra urban streets and roads and stop harassing and torturing innocent and defenseless citizens but they must also be withdrawn or have those of them in the State’s Joint Security Taskforce (JTF), alongside other law enforcement agents sent to Aghamelum Forests and Okija Community where they are needed to go after the killer cultists and their sponsors and the killer Fulani Herdsmen terrorizing the Aghamelum Forests and Okija Community respectively.