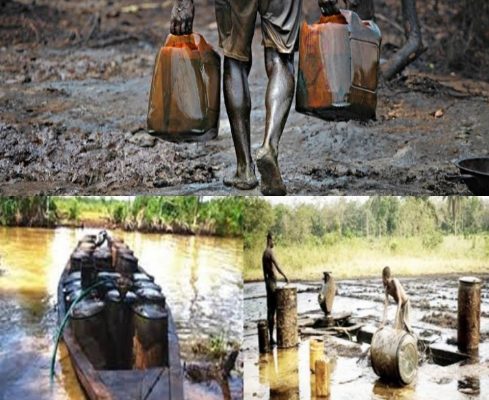 Civil rights advocacy group, Human Rights Writers Association of Nigeria (HURIWA) on Sunday, lambasted the Federal Government led by President Muhammadu Buhari over the government’s disclosure that about $3.27bn worth of oil had been lost to theft in the last 14 months.

HURIWA, in a statement by its National Coordinator, Comrade Emmanuel Onwubiko, said the disclosure by the government was useless and was of no benefit to Nigerians.

It noted that the government, having indicted itself with the revelation, should speedily ensure that the economic saboteurs – in government and outside government – were named, shamed and prosecuted for deterrence purpose.

The group also said the outrageous amount lost to oil thieves amid fuel scarcity for about two months in 2022 first quarter showed the obvious failure of Buhari who should quickly quit as Minister of Petroleum Resources.

“How can Nigerians be in the midst of plenty and still suffer incurable and perpetual scarcity because of the leadership failure of some people? The President should resign as Petroleum Minister having demonstrated gargantuan incompetence,” HURIWA’s Onwubiko said.

Recall that the Federal Government through the Nigerian Upstream Petroleum Regulatory Commission days back said the rising rate of crude oil theft in the Niger Delta had led to the loss of $3.27bn worth of oil in the last 14 months.

According to media reports, the Chief Executive of NUPRC, Gbenga Komolafe, made the disclosure in a presentation at a stakeholders’ engagement in Abuja.

Also, the Independent Petroleum Producers Group, disclosed that about 82 per cent of its oil production was stolen in the month of February 2022, when fuel scarcity bit Nigerians the hardest.

Reacting, HURIWA’s Onwubiko slammed the Federal Government; the President; the Minister of State for Petroleum Resources, Timipre Sylva; as well all agencies involved including NUPRC; the Nigerian Midstream and Downstream Petroleum Authority; and the Nigerian National Petroleum Company Limited led by Mele Kyari for failing Nigerians by allegedly covering the theft for 14 whole months.

Onwubiko said, “It is alarming, incredulous and ridiculous that the Federal Government waited this long to make this useless and needless disclosure that about $3.27bn has been lost to crude oil theft in the last 14 months.

“It is now becoming clearer that the government harbors these crude oil thieves so the search should be inwards to fish out these economic saboteurs who must have been colluding with external parties to siphon Nigeria’s commonwealth. These betrayers in government and their external accomplices must be subjected to the severest sanctions provided for by the law.

“To prove its innocence, if any at all, the government should name and shame these thieves before being tried in a competent court of law. The government has the legal obligation to arrest these thieves. And this must be done in earnest. Anything aside from this is a charade of the so-called anti-corruption crusade of the federal government as the protector of a thief is a thief too.”

Previous PostAPC Convention: CNPP Speaks on Buni-Led CECPC, New Party Leaders Next Post2023 Presidency: I'm the Only One Who Can Wrestle Power from APC - Wike