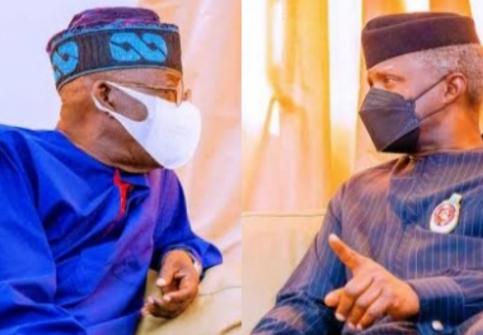 After months of speculation and political permutations, Vice President, Yemi Osinbajo, has summoned the courage to contest against his political benefactor, Asiwaju Bola Ahmed Tinubu in the 2023 presidential election.

VP Osinbajo made his declaration to vie for the presidential ticket of the All Progressives Congress (APC) official by making the announcement via social media platforms on Monday morning.

This is coming weeks after rumours made the rounds that VP Yemi Osinbajo had to contest in the forthcoming presidential election in which his ally, Senator Ahmed Tinubu, whom he served in his government while he held sway as the Lagos State Governor, had declared his intention to contest.

Tinubu, while declaring to vie for President, had said it was his lifetime ambition to be President of Nigeria.

However, recalling his actions as vice president under President Muhammadu Buhari in the last seven years, Osinbajo outlined his reasons for joining the race.

Part of what he said was that “For the past seven (7) years, I have served as Vice President under a true Nigerian patriot, President Muhammadu Buhari.

“In these 7 years, while on the train of duty and service, I traversed every part of our country, meeting Nigerians of every cadre, class, tribe and walks of life, both young and old; I MET YOU.

“I’ve stood where you stand and sat where you sit. I know and I understand our hopes, aspirations and fears from a place of relatable proximity; and I believe that in those hopes and aspirations are the seeds for the great Nigeria that we all desire.

“I believe that the very reason why the Almighty God gave me these experiences, these insights, and these opportunities, is that they must be put to the use of our country and its great peoples.

“This is why today, with utmost humility, I formally declare my intention to run for the office of the President, Federal Republic of Nigeria, on the platform of our great party, the All Progressives Congress.

“I also most solemnly and respectfully seek your support as fellow Nigerians everywhere in this land and the diaspora, as we embark on this great and exciting journey that lies ahead of us”, Vice President Yemi Osinbajo said.

The Street Reporters Newspaper reports that Osinbajo’s declaration of interest to join the presidential race has definitely altered political equations and permutations in the South West of Nigeria.

Before Osinbajo’s declaration, there has been unconfirmed social media reports suggesting that the former Lagos state Governor, Bola Ahmed Tinubu is considering pulling out of the presidential race.