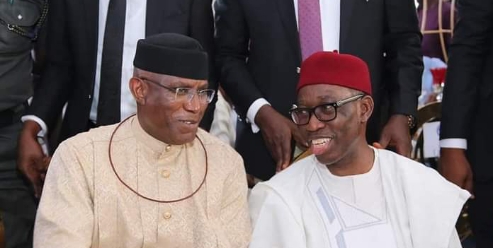 Delta State Commissioner for Information, Mr Charles Aniagwu, has said that contrary to claims in some quarters, Deputy President of the Senate and APC Governorship Candidate in the state had no hold on the state, saying it would take a miracle for him to win in the 2023 general election.

He said Omo-Agege’s woes were compounded by the massive failure of the APC at the centre to deliver on economy, security and management of the nation’s diversity.

Aniagwu stated this during an interview with Arise TV on Thursday, noting that the Peoples Democratic Party (PDP) was very strong and popular in the state despite the current court tussle over the party’s guber candidacy.

He said that over the years the party had done quite well in the state having progressively won elections in all senatorial districts in the state.

According to him, the greatest disadvantage the APC has in Delta is not only the fact that Omo-Agege is not truly on ground but largely because of the very very ineffective performance of the APC at the National level.

“Senator Ovie Omo-Agege is someone i have immense respect for and he knows it because I can actually call him a senior friend because once in a while we interact.

“He has all the rights to contest but he knows that when it comes to Delta, that it will take a miracle for him running in the platform of the APC to be able to win because apart from the fact that Delta is almost synonymous with the PDP, the performance of Governor Okowa in the last seven and half years has dealt a very big blow to the APC.

“And the chances of APC in Delta has been further worsened by the abysmal performance of the APC at the National level especially in the area of the economy, education, security and their inability to manage our diversity.

“In 2019, they had federal might yet we taught them a lesson, a bitter one at that.

“He didn’t just win them in Delta North and Delta South, he went to their stronghold in Delta Central and won in 6 local government areas out of 8, and what that tells you is that the PDP has continued to expand and deepen its roots across the state,” Aniagwu added.

Aniagwu further remarked that the chances of the APC had been  further worsened by the very abysmal performance of the party at the national level especially in the area of the economy, education, security and their inability to manage our diversity which today is the greatest challenge in this country.

“This has to a large extent weakened the trust which we had in our common heritage and that is what makes the Atiku-Okowa ticket very paramount because they will definitely unify the nation and bring it to the path of progressive growth,” he said.

On Atiku-Okowa’s inroads to Northern Nigeria, Aniagwu said that the return of Ibrahim Shekarau to the party was a good omen recalling that the former Kano State Governor had lots of influence in the state.

On David Edevbie challenging emergence of Oborevwori in court, the Delta Information Commissioner said the party does not begrudge him because it was his right to seek redress.

“When somebody feel aggrieved and decides to go to court to seek redress that is not a sharp disagreement, it is within their fundamental human rights to so do.

“One good thing about Edevbie’s case in court is that he’s not challenging the sanctity of the primary election that produced Sheriff Oborevwori as governorship candidate.

“He clearly admitted that the election was well conducted and that Oborevwori carried the day and what that tells you is that to a very large extent, the PDP in Delta was able to reason in one direction.

“He decided to raise other issues which is within his own rights as a contestant and those of us in PDP are not begrudging him for doing that.

“But at the end of the day the party will not just take part in the 2023 governorship election in Delta, but the party will work as one party to produce a Governor that will preside over the affairs of Delta under platform of the PDP.” Aniagwu stated.