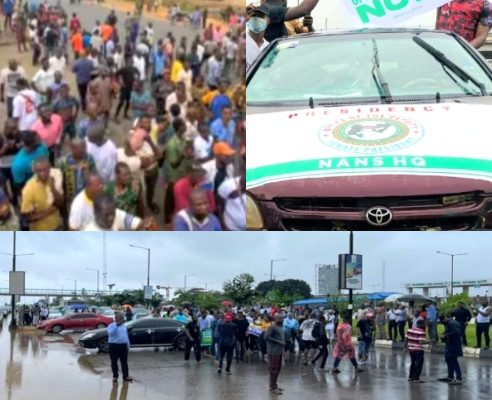 Aggrieved Nigerian students protesting the continued inability of the Federal Government to meet the demands of striking universities lecturers have blocked Nigerian airport in their bid to prevailed upon the government to end the prolonged industrial action.

The students had threatened to shut down the airports to force the federal government to settle the lingering dispute with the Academic Staff Union of Universities (ASUU) over agreement reach by both parties in 2009.

The action left scores of both local and international passengers stranded at the Lagos Airport.

The aggrieved Nigerian students seem to be achieving their aim of blocking flight operations and other activities at the Lagos airport as they succeeded in blocking both the local and international access ways to the airport.

In the same vein, the students at the local wing of the airport blocked the way leading to the General Aviation Terminal (GAT) at airport while singing solidarity songs.

Hundreds of car owners were trapped in their cars as there was no way of escaping from the gridlock created by the action of the students.

As of the time of filing this report, it’s not certain whether there will be flight operations at the airport Monday as many travellers particularly, those travelling within the country have been affected by the protest.

Human rights lawyer, Femi Falana, had in August called on the Federal Government to sign a renegotiated agreement with the striking members of ASUU.

The Senior Advocate of Nigeria had last month urged both ASUU leadership and the ruling All Progressives Congress (APC) administration to resume negotiations in order to end the prolonged strike for the overall good of Nigerian students.

He accused the Federal Government of resorting to blackmail ASUU, recalling how talks with the union ended in deadlock, a situation that dashed the hopes of many students.

The Federal Government refused to commit itself to the faithful implementation of collective agreements reached with ASUU and has gone to court to force the lecturers back to the lecture halls.

Falana had recalled that in the 1992 and 2009 FG/ASUU Agreements, it was expressly stated that the revenue realised from the sale of the properties of the Federal Government abandoned in Lagos when the Federal Capital was moved to Abuja would be channelled towards the funding of tertiary education in the country.

He maintained that the Federal Government turned around to selling the properties to powerful private individuals and corporate bodies at low giveaway prices.

However, the Nigerian government earlier in the month approached the National Industrial Court (NICN) sitting in Abuja, requesting an order for ASUU to resume while the dispute is being addressed.

According to the government, the new development followed the failure to reach an agreement through dialogue over the ongoing seven-month-old strike.

ASUU had embarked on an initial four weeks strike on 14 February, and has continued to extend it as talks with the government fail.

On 29 August, ASUU announced an indefinite extension of the strike, accusing the government of insincerity.