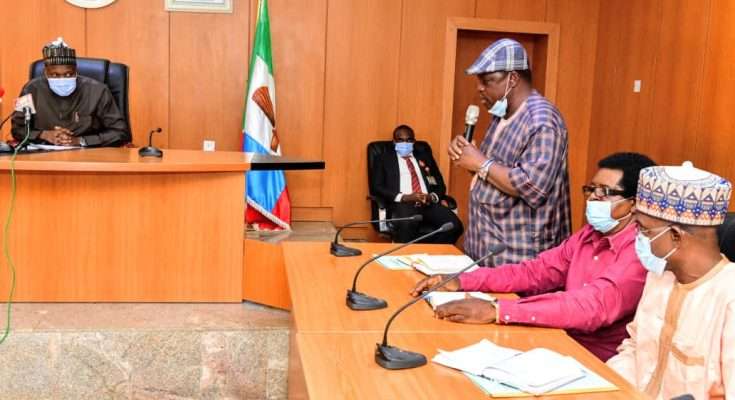 Gombe State Governor, Alhaji Muhammadu Inuwa Yahaya says in spite of competing demands, his administration will continue to give priority attention to the state-owned versity, the Gombe State University, in order to enhance its academic and physical development.

Governor Inuwa Yahaya stated this when he granted audience to the officials of the Academic Staff Union of Universities, ASUU, led by its Ibadan zonal coordinator, Professor Ade Adejumo.

The Governor described his administration as a lecturer-friendly one, given the array of cognate academics serving under it such as the State Deputy Governor, the SSG and the Commissioner of Higher Education among others who came from the ivory towers.

The Street Reporters Newspaper reports that he appealed to ASUU to remain calm and continue to engage the government while his administration works out modalities for amicable resolution of issues raised by its members.

He said before the visit, a committee was constituted to interface with the Gombe State University Chapter of ASUU so that both the government and the union can have a clear understanding of the issues knowing fully well that the State ranks second from bottom in terms of allocation from the federation account.

This, the Governor said. was in addition to the poor IGR base of the State, the anormaly which he said his administration is putting necessary machinery in place to correct through stimulating the economy to generate wealth for the state and the people.

The Governor said when his administration came into office he found a backlog of earned allowances of the lecturers amidst huge debt inherted from the previous administration which prompted the setting up of a committee to have a holistic review of the financial position in relation to the needs of the state and how best to prioritise and manage the situation.

“So far I can say that in spite of the nation wide strike earlier on embarked upon by ASUU, we have been able to pay our lecturers to the tune of close to 1.5 billion naira, no ASUU member in Gombe will complain that they have not been paid their salaries for the last nine months or ten despite the fact that they joined the industrial action”.

On the issue of the University Governing Council, Governor Inuwa Yahaya said his administration has already constituted the Council, saying all other demands raised by ASUU are gradually being addressed.

” On the demand for funding in order to carry out research, we considered it and put it in the 2021 budget. Out of the 100 million we now put 50 million and we are ready to grant the 200 million monthly allocation to the University. We are doing this despite other competing demands. If you go to health and Agriculture, if you go to Basic Education and infrastructure, everywhere the demands are always increasing by the day, but as leaders we must continue to do our best to address all challenges’.

He called for mutual understanding between the State Government and ASUU as according to the Governor, “if we must move forward both the government and the university community must work together”.

He stressed that members of ASUU must endeavour to encourage members of the public to pay tax and not complain of over taxation.

According to him, education and other sectors can only be improved with revenue from taxes, adding that what members of ASUU in Gombe State pay as tax is less when compared to those at national on federal employment.

“Tax encourages performance and if we don’t perform you should hang us. These issues are symbiotic. All the issues are on the table and we will see how to address them with 2021 budget.

He also disclosed that Gombe state government will resume the implementation of 30,000 minimum wage effective from January.

“On the issue of infrastructure, I make bold to say that Gombe State University on take off was one hundred percent managed by the State Government and the succeeding government after Danjuma Goje who set up the University, was only one- the immediate past, which did not care to do anything that could move the institution forward and instead created more institutions thereby over burdening the system to the detriment of basic education and other more important ventures” .

“I will like to plead with ASUU at the National level because locally we are managing with our own, please ask your people to sacrifice more and allow us work out how best we can address these issues. May be we will set timelines and milestones, but we will try to do as much as we can as a government”.

Earlier speaking, the Ibadan zonal coordinator of the ASUU, Professor Ade Adejumo, who is also the convener for the visitation to Gombe, said they were in the State to advocate for better funding of the Gombe State University in order to enhance effectiveness in teaching, learning and research.

Professor Adejumo equally appealed to the Gombe State Government to look into the possibility of relaxing the tax regime for its members in the State so as to enhance their take home pay.

While appreciating the Inuwa Yahaya led administration for tackling the challenges confronting the State, the Ibadan zonal coordinator of ASUU appealed to the State Government to address issues confronting its members so as to avoid possibility of an industrial action.

He however said the window of negotiation is still wide open.

Recall that Governor Muhammadu Inuwa Yahaya has already set up a negotiating team on the ASUU demands under the chairmanship of the state Deputy Governor, Dr. Manassah Daniel Jatau.