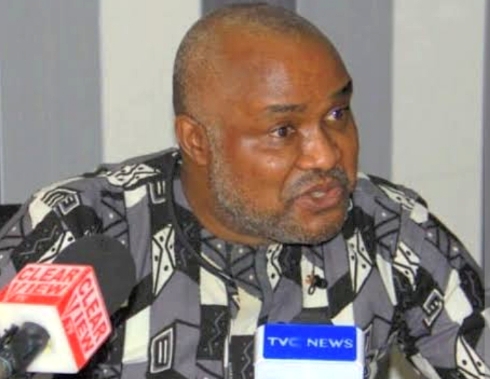 Civil rights advocacy group, Human Rights Writers Association of Nigeria, (HURIWA) on Monday, bemoaned the successive number of building collapses across the country, saying state governments, town planning authorities and building-controlled agencies must step up regulatory standards to stop the menacing trend which has claims scores of lives, especially in the last one month.

HURIWA’s National Coordinator, Comrade Emmanuel Onwubiko, in a statement, canvassed the passage of a bill to criminalise the usage of substandard materials by building engineers and builders even as the Rights group says it will be sending a letter to the hierarchy of the National Assembly and the President to canvass the passage of building collapses due to engineering lapses and corruption as offences punishable by the death penalty.

The group tasked state governments and regulatory agencies to go beyond issuing condolence statements after building collapses were avoidable if they were diligent in the enforcement of building standards and protocols.

HURIWA particularly asked the government of Lagos State government to take concrete punitive measures against her officials that connive with land speculators to erect substandard structures that have collapsed in quick succession in the State if recent. The Rights group asked the Lagos State House of Assembly and the Governor to declare a state of emergency on building collapses in the State.

The rights organisation expressed concerns at the quick succession of building collapses in the month of August and September. From Lagos to Abuja, Kano and Akwa-Ibom, the spate of wreckages in the last four weeks cut across the country.

For instance, in September 2022, a four-story building under construction collapsed on Iman Street off Aka Road in Uyo, the Akwa Ibom State capital. In the Amukoko area of Lagos State, the fence of a school, Covenant Point Academy, collapsed on pupils. Also this month, a three-storey building caved in in the Bodija area of Ibadan, the Oyo State capital. Last week, a seven-storey building caved in in the Victoria Island area of Lagos.

Sadly, scores of persons lost their lives while many others were injured in all of these recent tragic incidents.

Building collapses have been at its highest since last November when a high-rise building crumbled in the Ikoyi area of the state, killing at least 44 people and injuring many others.

Similarly, eight bodies were recovered after a three-storey building collapsed in Ebute-Metta in May. Also in May, another building in the Ago Palace Way area of Lagos State collapsed.

Aside from building collapses, a portion of the Ado–Ilawe Road this month collapsed, plunging motorists plying the road to their destinations in the states, into untold hardship.

Commenting, HURIWA’s Onwubiko said, “Beyond going for an on-the-spot assessment and photo ops, Governor Kayode Fayemi must stop the menacing trend and prosecute the quack contractor.

“The ugly trend of collapse of buildings, bridges and newly built road collapses all over the country shows ineffectual leadership at the state level. Governors, commissioners and local council officials who connive with rogue contractors to build roads that collapse as soon as they are commissioned deserve the death penalty and in the case of such Governors, they should be arrested, prosecuted and punished the moment their constitutional immunity lapses with the expiration of their tenures in office.

“HURIWA recommends the passage of criminal law making the using of substandard materials for public building and infrastructure punishable by stiff penalties for culpable engineers.

“This is important because until a crime attracts specified enforceable sanctions, offenders of such crimes will continue in it with impunity. Negligence and unprofessional conduct such as cutting of building steps as well as administrational connivance must be stamped out forcibly through a legal instrument. We similarly demand legal sanctions for Customs officials and officials of Standards Organisation of Nigeria that are compromised by sellers and importers of substandard building materials into Nigeria.

“HURIWA urges the Engineering Registration Council of Nigeria to partner with the Standards organisation of Nigeria and security forces to rid Nigetian markets of substandard building materials including cement materials no matter how powerfully connected the manufacturers are if they are made in Nigeria.

“HURIWA recalls that a Bill for Act to establish the Construction Materials Standardization Agency to standardize and control the use of materials for the construction industry in Nigeria in December 2021 scaled second reading in the House of Representatives but nothing has been heard of the bill. It is important for the bill to come fully to life and become a law to enthrone sanity in the construction sector in the country.

“State governments must stop paying lip services to the menacing trend. State governments must enthrone the ‘Never Again’ culture. Officials and appointees found colluding with building contractors to compromise standards must be shamed and named. Governor should institute judges-led public inquiries into every building disaster to curb the serial game of death and sorrow in Nigeria as past occurrences have been traced to quackery, faulty designs, the use of substandard materials, foundation failures, and corruption.

“Persons and firms indicted must be assiduously prosecuted, their licensees seized and exposed in the media so that innocent potential homeowners won’t fall into their hands.

“Governors must further re-examine standards of the 2006 National Building Code to enforce regulations and ensure quality, standards and safety are enthroned in Nigeria’s built industry.