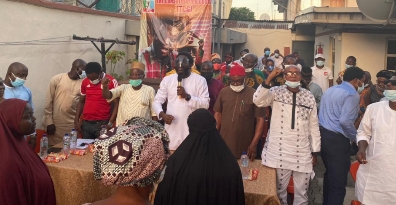 The atmosphere around the National Secretariat of The Consolidation Group (TCG) in Amuwo Odofin LGA was charged on Monday, 10th May 2021 as the group showed great readiness for the forthcoming APC primaries billed to hold during the week.

The leader of the group, Comrade Ayodele Adewale proudly presented TCG Councillorship candidates to members who attended, he took time to read out a brief profile about them and how they have been steadfast during the course of the struggle in the last 6years.

He wasted no time in moving to pressing matters as he dwelt upon Party loyalty and commitment as a pinnacle to the successful selection process of the Councillors.

He charged them to remain focused and put the interest of the community close to their hearts when elected into office.

He reminded them that loyalty was the underlying ethics to the group and their loyalty and commitment to the Asiwaju Bola Ahmed Tinubu, the APC and Amuwo Odofin LG community should be central to every activity that they pursue.

Comrade Ayodele wished them every success as they move to the next stage of the race which is the APC Party screening and thereafter the Party primary election.

Comrade Ayodele Adewale also announced that two more members had purchased the nomination forms for the Chairmanship seat hours before the deadline on Tuesday making a total of 5 aspirants jostling for the number 1 seat.

He advised all candidates and members to continue interacting and engaging with all the old and newly registered Party members who had come aboard during the APC party registration exercise across the Local Government.

The leadership of the lgbo Speaking Community in Lagos State led by the State President General, Chief Sunday Udeh was also present at the Monday meeting with some members of his executives.

They described Comrade Ayodele Adewale as a detribalized leader who’s inclusive approach benefitted all in the LG including the non indigenes in Amuwo Odofin LGA.

He appealed that all members should continue to show loyalty to Asiwaju Bola Ahmed Tinubu, the APC and immediate past Council Chairman, Comrade Ayodele Adewale as they remains the only leaders and entity in Amuwo Odofin LG, Lagos State and Nigeria that associate and treat non indigenes like their family.

He also urged every member to be more committed and play an active role in furtherance of the group’s objectives and most especially, the APC Party.

Chief Sunday Udeh promised a donation of N50,000 to the group for refreshment before the next meeting as a mark of support for being a part of the highly influential and organised group, TCG.

TCG members also welcomed Mr. Okpor Emeka, the candidate of the Young Progressives Party (YPP) in the last 2019 House of Assembly Elections in Amuwo Odofin LGA. He arrived with some of his loyal supporters.

This visit was to intimate the APC stalwart and founder of the Consolidation Group (TCG), Comrade Ayodele Adewale of their readiness to join the Progressives.

He stated that they had given it great thought and consideration and having consulted far and wide, they had decided to use the platform of TCG to defect to the APC Party.

Mr. Okpo described APC as the only Party with a true manifesto to alleviate the status of the common man.

The defection move was facilitated by Comrade Balogun Ibrahim, one of the APC Chairmanship aspirants and a member of TCG.

Comrade Ayodele received the defected members and appreciated them for deeming it fit to add to the numbers of the APC Party.

He urged them to contribute to the success of the Party most especially during this election period.

He also promised to formally hand them over to Chief Tunde Balogun, the acting chairman of the APC in Lagos State at an appointed time.

The meeting ended with ward accreditations, where a total of 314 members were recorded to have attended the meeting.

The leader of the group, Comrade Ayodele Adewale wished all Muslim faithfuls, a happy Eid al Fitr celebrations in advance and declared that the next meeting is scheduled to hold on Monday 17th May, 2021.