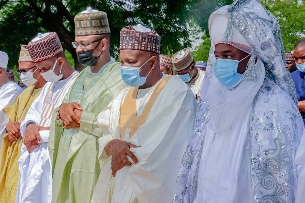 Gombe State Governor, Muhammadu Inuwa Yahaya earlier today led digniteries, including former Governor of the state, Sen. Muhammad Danjuma Goje, Minister of communications and digital economy, Dr. Isa Ali Ibrahim Pantami, Speaker of the state House of Assembly and members of both federal and state legislatures among others to observe the two Raka’at Eid prayer at the central Eid praying ground in Gombe.

Governor Inuwa Yahaya and the dignitaries joined the Emir of Gombe, Dr Abubakar Shehu Abubakar lll at the prayer ground to commemorate the start of the Eid el-Kabir festival.

Governor Inuwa Yahaya while addressing newsmen shortly after a reception he hosted for the guests, further re-echoed his Sallah message which he had earlier issued to the people of the State, calling on the ummah to sacrifice more for the corporate existence of the country and in the spirit of the season.

The Governor said the virtue of Eid El-Kabir which connotes love, obedience and sacrifice are needed for the corporate existence of the country and for individual relationships so that Nigerians can leave together as brothers and sisters.

“Our understanding transcends through religious divides and through our cultural, geographical or political difference; that spirit and brotherhood we should maintain and ensure the survival and success of the Federal Republic of Nigeria”.

Governor Inuwa Yahaya urged Nigerians to continually to pray for President Muhammadu Buhari and all leaders at all levels.

“And here in Gombe, the Government, the traditional leadership and the leadership of the Ummah and our Christian brothers, the Clerics and the Church leaders are all collaborating so that all of us work together for the benefit of mankind and for the upliftment of the Nigerian society”.

He noted that the country is going through hard times in in its social, economic and political spheres as well as health wise, particularly with the challenges posed by the covid-19 Pandemic, stressing that Nigerians need to be together and support one another as the nation meanders through the trying period.

Governor Inuwa Yahaya prayed the Almighty Allah to sustain and protect the country from the current calamities confronting her and for a successful and hitch free Sallah festivity..

In a sermon delivered by the chief Imam of Gombe Central mosque, Sheikh Mohammed Umar Pindiga shortly after the two raka’at prayer, the cleric charged the congregation to translate the good virtues of Eid el-Kabir into the art of nation building through obedience to constituted authorities and sacrifice for the good of all.

He called on Muslim faithful to intensify prayers for return of peace in Nigeria and bumper harvest, especially at a time when rainy season is in full swing.

Sheikh Mohammed Umar Pindiga thereafter performed the symbolic slaughtering of a ram, signifying the commencement of the festival in earnest.

At the Palace of the Emir of Gombe, Governor Muhammadu Inuwa Yahaya and other dignitaries were treated to a colourful durbar to the admiration of all.

In his message to mark the religious festival, the Emir of Gombe, Dr. Abubakar Shehu Abubakar lll, called for sustained prayers for the nation and its leaders.

He equally enjoined farmers to brace up for the rainy season, just as he emphasized the need for harmonious relationship among the diverse people of the state and in particular between farmers and herders for a peaceful Gombe state.

The monarch commended Governor Yahaya’s leadership style and his unprecedented achievements in all facets of human endeavours within the last two years.

The Governor was accompanied to the Durbar by former Governor of Gombe State, Senator Muhammadu Danjuma Goje, the Minister of Communications and Digital Economy, the Speaker Gombe State House of Assembly, Abubakar Mohammed Luggerewo, member of House of Representatives, Hon. Abubakar Ahmed Yunusa, former Minister of FCT, Dr. Aliyu Modibbo Umar among other dignitaries from within and outside the State.