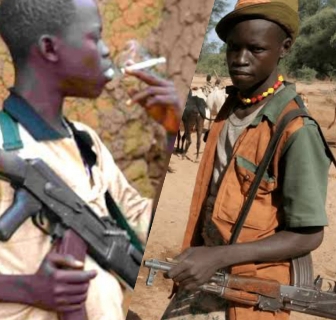 According to Joseph Anawah, a community leader and former media aide to an ex-governor of the state, Gabriel Suswam, the herders invaded the communities with more than 1,000 cows and settled at the Tse Azaye, Tse Agah, Tse Getim and Tse Iosun communities in the Tombo ward.

Anawah said, “They are so hostile and do not want anybody to come close to them. The residents, on sighting the arrival of cows, started packing out of their villages for the fear of the unknown.

“When the kindred Head of the Mbaifu community,  Gbamga Nengem, visited their settlement to know their mission in his community, they told him clearly that they had come for settlement and any attempt to evict them, either by the host community or government agencies, would invoke their anger and they would be left with no option but to resort to physical and open confrontation.”

HURIWA, in a statement by its National Coordinator, Comrade Emmanuel Onwubiko, urged security agents to arrest the militiamen terrorising the North Central state and prosecute them forthwith to send a clear signal that forcible takeover of land won’t be condoned.

HURIWA condemned the resurgence of the heinous activities of Fulani herdsmen in Benue and called on federal authorities and security agents to act fast to stop the menacing trend.

The group noted that the growing killings by aggressive killer Fulani herders have reached an alarming decibel and the regime of the President Muhammadu Buhari must act swiftly if indeed it does not covertly support the acts of the vicious herders.

Just last Saturday, suspected herders killed three persons in the Guma Local Government Area of Benue while returning from a burial. Killings, abductions and rape have been steadily recorded on a daily basis in the state since 2015 when Buhari took over the seat of power.

As though emboldened by Buhari’s tribal affiliation to them as a Fulani man, the herdsmen attacked Governor Samuel Ortom last March in what was a clear assassination attempt, with the governor saying herdsmen numbering about 15 attacked him in his farm at Tyo-Mu community, near Makurdi, the state capital. He attributed the attack to his campaign against killer herdsmen, who had been attacking farmers in the state and other parts of the country.

A group, the Fulani National Movement had said it carried out the attack on Ortom. The group disclosed that 11 of its members were involved in the assassination attempt on Ortom, noting that a technical error aided the governor’s escape, adding that he would not escape next time.

Sadly, till date, the Nigeria Police Force, the Department of State Services, the Nigerian Army, and other security and intelligence agencies are yet to bring members of this callous group to book.

“However, for all of these killings and destructions of farms and houses, churches, killing of priests and worshippers, there is no single suspect in jail for these heinous crimes because the federal government is unwilling to order soldiers, DSS and police to arrest and for Attorney General of the Federation to prosecute them for these mass killings.

“In fact, the President has rather listed Governor Ortom as persona non grata for demanding action and justice for his people. At several times the Benue State government carried out mass burial including the burial of over 100 natives killed at a time by armed Fulani herdsmen and yet these terrorists are freely moving about.

“The governor almost got killed but for good fortune that he escaped. police said the attempted killers who shot at the governor were arrested but this is false because for a year now, not one person is prosecuted. Federal government has continued to sweep these killings under the carpet.

“The AGF must also begin the process of declaring killer herders as terrorists just like bandits. Killer herdsmen must be prosecuted for their atrocious acts. When impudence goes unchallenged, the aggressor becomes emboldened.

“HURIWA, therefore, calls for the immediate arrest of the marauding herders who displace Benue original residents from the Logo LGA. There must also be judicial actions against these killers who are roaming freely in the streets of Nigeria because the Federal government does not wish to arrest or prosecute them.

“Already, HURIWA has filed a complaint at the International Criminal Court in The Hague Netherlands over it.

“HURIWA will also be filing another fresh petition this week because for seven years, the Federal Government has tolerated the killings and postured itself as a Fulani herders’ sympathiser”, the rights group stated.