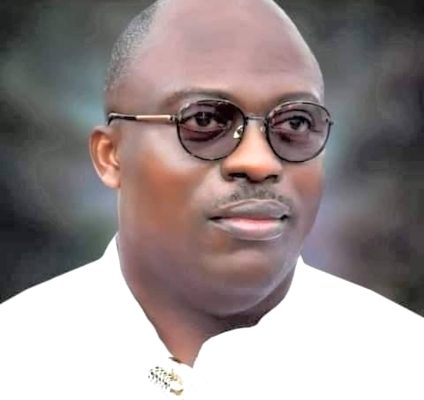 HURIWA To Rivers PDP Governorship Candidate: Submit Yourself To EFCC

The news making the rounds that the governorship candidate of the Peoples Democratic Party in Rivers State in the 2023 general election, Siminialayi Fubara, on Tuesday night escaped an attempt by officials of the Economic and Financial Crimes Commission to arrest him has been described by the Human Rights Writers Association Of Nigeria (HURIWA) as disgusting and shameful.

The prominent Rights advocacy group, in a statement signed by its National Coordinator, Comrade Emmanuel Onwubiko, reminded the politician that under the constitutional norm, he is innocent and therefore should respect a properly constituted law enforcement agency and surrender himself for questioning.

HURIWA said it was a bad precedence that the Rivers State born politician is setting, if he continues to evade arrest of the EFCC, which is a body set up by law of the Federal Republic of Nigeria just as their task is supported by the constitutional provision in Section 15(5) which states that eradication of corruption and combating abuse of office is the duty of government.

HURIWA quoting news media said  the drama unfolded  at the Port Harcourt International Airport as the plane ferrying Fubara and other PDP chieftains who had accompanied him to Abuja to receive his Certificate of Return touched down at the airport just as the Rights group said it is inexplicable why the top Rivers politician is evading the invitation of the Economic and Financial Crimes Commission when he would be accorded all his basic and fundamental human rights as a citizen since the anti-graft agency can’t afford to be lawless and unethical in its activities of waging a war against corruption.

HURIWA also stated that unlike the previous acting Chairman of the EFCC in which someone allegedly died in EFCC detention, the new dispensation is not associated with draconian detention facilities for now.

The Rights group encourages the Rivers politician not to be afraid if he us not guilty since only the guilty are afraid moreover when he can afford to engage the services of reputable lawyers to prove his innocence.

HURIWA condemned the reported physical confrontation against the operatives of the EFCC going by the news report that as the operatives move to effect the arrest of the Rivers PDP governorship candidate for questioning over allegations of graft related offences, some youths believed to be his supporters allegedly resisted the officials and attacked them.

Though details of the alleged attack were still sketchy as of the time of filing the report by the media but sources said some of the EFCC operatives sustained injuries.

HURIWA recalled  that the EFCC had declared Fubara, the immediate past Accountant General of Rivers state, and three other top state government officials wanted over alleged N117 billion fraud.

After the drama at the airport, Fubara who won the state PDP governorship primary on May 25 proceeded to the state party secretariat where he addressed party supporters and stakeholders.

HURIWA said the unbecoming tendencies of politicians to totally disregard invitations of lawfully constituted law enforcement agencies is unconstitutional just as the Rights group charged the police to investigate the allegations of physical attack of the operatives of the EFCC by some unidentified youths allegedly said to be supporters of the embattled Rivers State Governorship Candidate of the PDP.

HURIWA said it was unimaginable that invitation by EFCC is dishonoured and those invited are hiding from being arrested which is a highly disgraceful Conduct especially going by the fact that the person involved is seeking to be elected as a governor of one of Nigeria’s richest States.

The group therefore charged the Rivers State Governor, Mr. Nyesom Wike, to ask his aides wanted by the EFCC to surrender and defend themselves since there is nothing to be afraid of if they are not guilty of the allegations moreover when the EFCC is expected to treat them as being innocent in the eye of the law until otherwise determined by a competent court of law in an open trial.