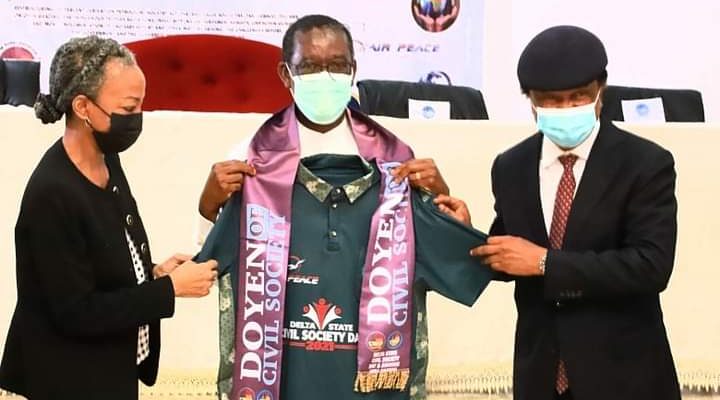 A coalition of civil society groups under the aegis of Nigeria Network of NGOs on Tuesday honoured Delta Governor, Senator (Dr) Ifeanyi Okowa, with the award of ‘Most-Friendly Governor in Nigeria’.

Presenting the award to the Governor at the Delta State Civil Society Day and Awards at Unity Hall, Government House, Asaba, leader of the group, Senator Shehu Sani, said that the award was in recognition of Okowa’s support and collaboration with civil society groups in the state and country.

Senator Sani said that he was amazed that Okowa was the only governor who recognise the contributions of civil society groups in the Nigerian project and called on other governors to emulate his kind gesture.

He said “Governor Ifeanyi Okowa is one that has exemplified by his actions, that he recognizes the roles and appreciates the civil society in Nigeria.

“Before 1999, there was 15-year of uninterrupted military dictatorship and it was at that time that the Nigerian civil society, particularly the human rights community, mobilized Nigerians and fought for democracy in Nigeria”.

Senator Sani added, “Since the restoration of the democratic rule, civil society has been involved in engaging the government in ensuring that tenets of democracy space are expanded.

“Secondly, the issue of ENDSARS which was a public revolt and objections, not just against police brutality but abuse of power, iniquity and injustice in the society – the new generation of Nigerians have woken up from their slumber to challenge the political situation.

“We are not that kind of people who do sycophancy. We are here in this state because the man who is in charge of this state has identified with the course of the common man, the course of young Nigerians and the course of democracy’’, Senator Sani said.

Speaking further, Senator Sani noted that “This is unusual. Since 1999, you are the only governor that has recognised the contributions of civil society in the struggle for the enriching of our democratic experience.

“I believe that this initiative should continue because the pace has already been set,” Sani stated.

The group had earlier paid a courtesy visit to the governor where the Senior Special Assistant to the Governor on Civic Engagement, Comrade Rex Anighoro, thanked him for integrating civil society members into his government to ensure that they worked together for the good of the state.

He said that since 2016, every December 14 had been set aside to celebrate the contributions of civil societies to the state.

In his remarks, Chairman of Civil Society Groups in Delta, Okezi Odugala, said sustainable development had been brought to bear in Delta with the governor’s support and collaboration.

He commended the governor for appointing women in various positions, especially as Vice Chairmen and Councilors in local government councils.

Odugala assured that the CSOs would continue to monitor government projects and policies for sustainable development of the state.

Responding, Okowa thanked the CSOs for the award and called for a greater engagement for the good of the nation.

“I welcome you all to Delta and thank you for the selfless service you are rendering to our nation.

“Many governments tend to shy away from civil society groups but I believe that until you get closer to them you may not be able to tap from their rich background.

“Many times when we are in very high offices, sometimes people may not tell us the truth, and any government that wants to succeed must work with groups that are closer to the society and civil society is a group that we cannot avoid.

“It is a group that should be consulted as many times as possible or create a platform where they can engage the government at all times.

“They are a voice of conscience and in their daily interactions with the people they have a lot of advice to offer.

“When the government is going wrong they should not be cowed but allowed to speak out in the interest of the general public.

“There is nobody too low that cannot speak out because if you don’t allow those voices to be heard you will hear them in the wrong ways,” Okowa said.

He congratulated his aide, Rex Anighoro, for his great works in the civil society engagement, adding that the state leveraged on the partnership with civil society to manage the ENDSARS crisis in the state.

“During the ENDSARS protests, leveraging on our partnership with the civil society, we were able to reach out to the leadership and I know what they are helping us to do in Delta.

“We have made them partners with the police and not as enemies. As a state, peace building has always been one of our core missions because we believe that once we have a peaceful state, investors will come,’’ he said, and called for greater engagement of civil society in the Nigerian society.

According to the governor, there is a need for greater engagement with government and civil society and all stakeholders in the Nigerian project because the more we sit together and talk, the better for us as a nation.

“If you don’t provide that avenue for us to talk and the people keep bottling up their anger it is not in the best interest of our nation.

“Many times good jobs are done and such jobs are not being recognized, but we thank God that we have the civil society who are able to speak the truth to power, particularly for those who won’t be able to speak.

“If the civil society does not exist, governance would have been more brutish than they are now.

“It is something we must appreciate you for as a nation and I believe that it is important we have greater engagement with civil society because in doing so, we have a better communication with our people at the grassroots and this has helped us in our state,” he stated.

[…] of Lagos, Ogun and Oyo States, respectively, had since joined forces with other ethnic and Civil Society Groups across Nigeria, in its universally celebrated advocacy, “2023: TINUBU IS A GO!”, under the […]