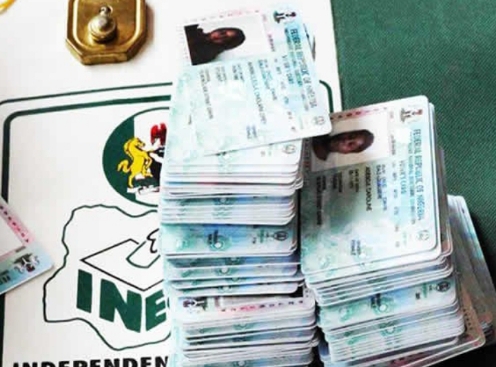 Ahead of the 2023 general elections, a civil society organisation, the International Society for Civil Liberties and Rule of Law (Intersociety) has again accused Nigeria’s electoral umpire, the Independent National Electoral Commission (INEC) of pushing the country into complex uncertainties. Specifically, the civil rights group accused INEC of disenfranchising and excluding a whopping 76 million voting citizens from voting and participating in February 25, 2023 presidential polls and bent on flooding the 2023 Presidential election with what it described as magic hinterland “votes” from 12 major polls rigging northern States.

The Intersociety equally accused INEC of frustrating southerners from getting their Permanent Voter’s Cards (PVCs) through unavailability of PVCs and INEC staffers, extortion, among others, insisting that the number of PVCs distributed per State since Dec 12, 2022 out of 29.5m uncollected PVCs unknown and undisclosed till date.

The full text of its press release, signed by its principal officers on Monday reads:

As it stands today, no fewer than whopping 76m Nigerians of constitutional voting age excluding estimated 20m ineligible identities or illegal voters comprising underage age children, illegal migrants, fake names and stolen identities/PVCs have undemocratically and dangerously been disenfranchised and excluded by the Independent National Electoral Commission from voting and participating in the Nigeria’s 25th Feb 2023 crucial Presidential Polls. Also, out of the so called “93.5m registered voters for 2023 general elections”, only 44m genuine PVC holders exist, out of which 10m have compromised their PVCs and VINs and sold their consciences to the devil. The above mentioned are a fundamental breach and impeachment of Section 12 of the 2022 Electoral Act of the Federation as amended.

The above findings by Intersociety followed thorough review of the ongoing distribution of Permanent Voters’ Cards or PVCs by INEC since 12th Dec 2022 following our recent checks in the South-East, South-South and non native areas of Lagos, Kano, Ogun and FCT, etc; with Anambra, Enugu, Imo and FCT as our case study.

INEC  was also found to be handling the 2022/2023 PVC distribution as “a makeshift” and this lukewarm attitude of the Commission is clearly understood as ‘a ground laying’ to push out and frustrate as much genuine PVC voters as the Commission could so as to easily have their way to outnumber the genuine PVC voters with 90% of the mobilized 20m “dead votes” to be pulled from estimated 8m underage and 2m illegal migrant PVC holders, 6m stolen or diverted PVCs and 4m fake names elevated by INEC as “human PVC holders”; and subsumed into “magic hinterland presidential votes” to be pulled from 12 major presidential polls States of Kano, Katsina, Jigawa, Sokoto, Kebbi, Zamfara, Bauchi, Borno, Yobe, Adamawa and Niger. These are in addition to no fewer than 10m harvested PVCs and their voter identification numbers or VINs.

INEC has also been found to be unwilling and unable to prioritize the PVC distribution including the Commission’s monumental failure to give live daily and weekly national updates especially the State by State breakdown of the total number of PVCs distributed so far and number of pre-2019 and 2022 PVCs remaining; in addition to gender and ethnic and religious components of the newly distributed PVC recipients.

INEC has further failed woefully to disclose how many of its claimed “newly printed 9.5m PVCs for newly registered 9.5m voters, 4m newly printed PVCs for transferred voters” and “pre- 2019 20m uncollected PVCs for those registered between 2011 and 2018” have been given or issued to their rightful owners. It was also found that INEC woefully failed in its constitutional and statutory duties by not properly disclosing or publishing the names and locations of the country’s 8,809 electoral wards which the Commission claimed to have designated as “PVC collection centers”.

Found too are general complaints of PVC collectors being frustrated or forced to back out of the collection exercise following sundry hitches deliberately and discriminatorily created by the Commission including unavailability of PVCs/INEC staffers and lateness of the concerned INEC staffers to work. Reported, too, are difficulties in locating PVC collection centers and organized group violence or threat of same targeted at non native PVC collectors (i.e. non native areas of Lagos State).

The INEC PVC collection exercise is further characterized by reports of long queues in the South-East, South-South and major non native parts of the South-West and FCT, etc involving nursing mothers, the old and pregnant women queuing under scorching sun and heat for half a day in addition to sundry extortion at collection centers especially in Anambra, Enugu and Imo States.

The above disclosures are in addition to “magic hinterland presidential votes” strongly feared to have already been penciled down by INEC from the North-West States of Kano, Katsina, Jigawa, Kaduna, Kebbi, Sokoto and Zamfara; the North-East States of Bauchi, Yobe, Borno and Adamawa; and the North-Central State of Niger.

This is to the extent that in 2015 Presidential Poll, the majorly securitization unmanned areas magically produced over 7.65m manual/fake votes for Buhari/APC out of total of 10.2m manual/fake votes credited to the same Buhari/APC. This was according to INEC statistics which further disclosed that “out of 15.4m total votes for Buhari/APC in the poll, 10.2m were made up of manual (fake) votes with only 5.2m votes genuinely emanating from PVC/INEC Smart Card Reader”.

The statistics further indicated that only 190,000 manual/fake votes for Buhari/APC came from the 17 Southern States and that out of Goodluck Jonathan/PDP’s total of over 12m votes in the Poll, only 3.3m came from manual/fake votes.

Similarly speaking, in 2019 Presidential Polls, the same 12 major presidential poll rigging Northern States magically produced 9,118.940 or over 9.1m “votes” or over 60% of the “winning votes” for Buhari/APC out of total of 15,191,076 credited to him and his political party as the “winner of the poll”.

Disenfranchisement Of Whopping 76m Registered And Unregistered Voters By INEC

As it stands today, no fewer than whopping 76m genuine Nigerian citizens of voting age under 18 Years Old and above age brackets have been disenfranchised and forbidden by INEC from voting and participating in the crucial Feb 25, 2023 Presidential Polls. As at early Dec 2022, 77.7m voting citizens were disenfranchised by the Commission. Today, the number is projected to have minutely gone down to 76m following the ongoing ‘INEC makeshift PVC distribution’.

However, the projection is subject to downward or upward review pending when INEC discloses the actual number of PVCs distributed since 12th Dec 2022 (if any). Originally speaking, not less than 120m genuine citizens of voting age exist in Nigeria out of the country’s total UN projected population of 218m as at Dec 2022, out of which 55% or 120m belong to voting age.

INEC had on 31st May 2022 through its National Commissioner for FCT, Nasarawa, Kaduna and Plateau, Mohammed Haruna disclosed that “there are about 20m uncollected PVCs pending since 2019”. Outside the 30m unregistered voters and 29.5m registered voters without PVCs as part of the 77.7m disenfranchised Nigerian voters, there are also 18.2m destroyed registrations involving those registered in 2022 totaling 27.7m, out of which INEC deliberately, flimsily and discriminatorily destroyed whopping 18.2m and allowed only 9.5m. Totality of the above brings the total number of disenfranchised voters in Nigeria ahead of the crucial Feb 25, 2023 Presidential Poll to 77.7m, out of which a projected reduction of 1.7m subsists.

It must be remembered that the over 76m voting citizens were disenfranchised by INEC through ethnic and religious fueled discriminatory policies adopted by the Commission during the 2021/2022 Continuous Voters’ Registration and the PVC distribution exercises. This is to the extent that INEC went out of the way to flood the National Register of Voters with tens of millions of Muslim underage children, illegal migrants, fake names and stolen PVCs in its desperate bid to outnumber genuine non Muslim voters especially members of Northern and Southern Christian populations.

INEC Inflaming Nigeria And Pushing It Into Complex Uncertainties

Disenfranchisement of Nigerian citizens of full blood and those of legitimate naturalization by INEC and their exclusion from voting and participating in national or sub-national and local council polls especially the coming Presidential Polls of Feb 25, 2023 is ‘lubricantly’ inflaming Nigeria or any part thereof and pushing the country into complex uncertainties. That is to say that to massively rig election is one thing but to contain the catastrophic effects of such rigging is another thing.

By ostracizing whopping 76m voting Nigerians, INEC has already ignited an unquenchable fire on Nigeria and laid lethal landmines waiting explosive detonation and by being bent on using skewed PVC data-sheet and other anti democratic methods including sponsored insecurity and civil space militarization to massively ostracize tens of millions of voting Nigerians of full blood and ‘populating’ the poll with ‘dead votes’ numbering 18m, the Commission is further pushing Nigeria or any part thereof into complex uncertainties capable of producing far reaching short term, medium term and long term consequences with maximum capacity to futuristically and radically reshape Nigeria or any part thereof.

Previous PostCONTROVERSY: Egbema Traditional Council/Kingmakers Want Gov. Okowa To Withdraw Staff of Office From Ubabiri Next PostELOT Felicitates With Agadagba of Egbema kingdom As He Receives Staff of Office