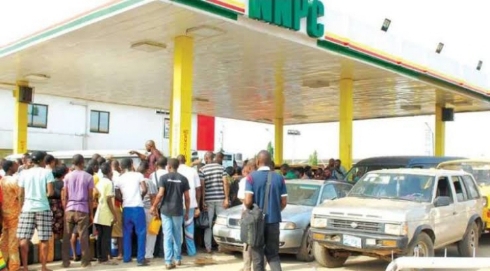 A 14-man Steering Committee has been constituted to find lasting solutions to the problems surrounding the supply and distribution chain of petroleum products in the country.

The committee which was set up by President Muhammadu Buhari would be chaired by himself and co-chaired by the Minister of State for Petroleum Resources, Chief Timipre Sylva.

The development was contained in a statement issued by the minister’s Senior Adviser on Media & Communications, Horatius Egua.

According to Egua, the committee has the mandate to among other things ensure transparent and efficient supply and distribution of petroleum products across the country.

This comes after months of lingering fuel scarcity in most parts of the country as oil markers have continued to lament the shortage in the supply of fuel.

The Steering Committee as noted in the statement is also expected to ensure national strategic stock management, and visibility on the NNPC Limited refineries rehabilitation programme and ensure end-end tracking of petroleum products, especially PMS to ascertain daily national consumption and eliminate smuggling.

The committee is as well saddled with the duty of ensuring sanity in the supply and distribution across the value chain, as the minister has directed the Nigerian Midstream and Downstream Petroleum Regulatory Authority (NMDPRA) to ensure strict compliance with the government-approved ex-depot and retail prices for PMS also known as petrol.

Egua noted that the president directed NMDPRA to ensure strict compliance with the government’s approved ex-depot and retail prices for petrol.

The committee is also expected to ensure stock management, visibility on the NNPC Limited refineries rehabilitation and track daily distribution to tackle smuggling, as part of its terms of reference.

To further ensure sanity in the supply and distribution across the value chain, he directed NMDPRA to ensure that NNPC Limited, which is the sole supplier, meets the domestic supply obligation of petrol and other petroleum products in the country.

The minister directed that the interests of the ordinary Nigerian be protected from price exploitation on other deregulated products such as diesel, kerosene and cooking gas.

“The federal government will not allow misguided elements to bring untold hardship upon the citizenry and attempt to discredit the government’s efforts in consolidating the gains made thus far in the oil and gas sector of the economy,” the statement stated.

Daily Trust reports that the committee is yet to be inaugurated or take off as the minister said President Buhari is expected back in Nigeria today from the 2nd edition of Dakar International Conference on Agriculture in Senegal.

Nura Ali, a retired worker of the NNPC said President Buhari was racing against time.

“Going by his experience since his days in the military, we shouldn’t have been where we are today.

“He was among the architects of some of the infrastructure we have in the oil sector but over time, all depots and the refineries built became comatose.

“I wish he took a decisive action from day one when he was sworn-in as president; sadly this did not happen until recently. Honestly I don’t think the committee will make any difference in the next four months when the president will hand over,” he said.

Collins Mic, who also worked at the NNPC and now works in a private oil firm said the real deregulation of the oil sector will only be actualised by the incoming administration.

“Buhari and the team should just do their best and move on. If you look at the committee very well, all the actors are the same actors working since time immemorial to right the wrongs in the sector.

“The next government should cash on the Petroleum Industry Act (PIA) and make the oil industry flourish. If the president as petroleum minister and Commander-in-Chief could not make much difference, I don’t think if something tangible would come out from a committee but Nigerians are optimistic people, we should give them a chance,” he said.

Petroleum marketers including NNPC Ltd, a commercialised public firm, last week, hiked petrol prices to over N190 per litre but the federal government had denied approving the hike.

The pump price for petrol at NNPC Retail outlets rose from N179 per litre to N185/l while private outlets sold for between N190/l and N195 from N180/l on Thursday.

According to some marketers, the hike was due to a slight rise in the ex-depot price of petrol from N148/l to above N150/l.

A marketer said depot owners got a memo from NNPC Ltd, being the sole importer of petrol, conveying the increment in wholesale price. This allegation could not be independently verified as of press time.

Although this is the first time petrol prices have risen this year, Daily Trust reports that prices rose severally in 2022 beginning from January when the scarcity hit major cities with the aftermath of the adulterated petrol distribution further worsened later by the Russia/Ukraine war.

No fuel at stations as black marketers thrive

Rising from around N165/l, petrol prices kept rising and has reached N190/l at major stations.

However, other independent stations sell for up to N310/l across states.

Currently, the scarcity is across the states and worse off in Lagos and Abuja. Daily Trust reports that even though more stations took delivery of petrol consignments on Tuesday, long-tailed queues were visible hours before the stations discharged the content and readied to sell the product.

Across the city centre in Wuse, Utako and Maitama, motorists were seen on queues at the few stations operating while other motorists succumbed to the will of petrol hawkers who sold a 10-litre content of petrol for N5,000 yesterday. Mr Jerry Onuh, said he was forced to buy for N3, 500 in Nyanya as his vehicle ran out of fuel.

A motorist in Jabi said he paid N4, 000 to black marketers at N400/l while pleading to get 10-litre of petrol.

Despite several meetings, the fuel scarcity had persisted as operators and the regulator of the downstream sector seem to be on a deadlock spree.

The NMDPRA said its Chief Executive, Farouk Ahmed had recently met with officials of the Depots and Petroleum Products Marketers Association of Nigeria (DAPPMAN), “Where they discussed critical issues on sustaining a steady supply of petroleum products across the country.”

The NMDPRA head also engaged with members of Nigeria Union of Petroleum and Natural Gas Workers (NUPENG), Nigerian Association of Road Transport Owners (NARTO) and the Petroleum Tanker Drivers (PTD) as well as with the Major Oil Marketers Association of Nigeria (MOMAN) but the fuel scarcity has worsened.

On Tuesday, the Group Executive Director, Downstream at NNPC Ltd, Engr. Adeyemi Adetunji, during an AGM of NARTO in Abuja, said the company has held several meetings with operators on the fuel supply issues.

“Up to last weekend, we had a series of meetings even into the night and very soon Nigerians will begin to see the results,” he stated.