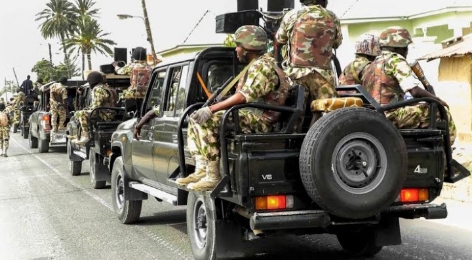 …Reveals That Islamic Jihadists Slaughtered Over 300, Abducted 400 In East Since Jan 2022

The International Society for Civil Liberties and Rule of Law (Intersociety) has said that beyond the Nigerian Army’s watery and diversionary reaction including deliberate misrepresentation of facts concerning their statement of 24th Nov 2022, it remains the irrevocable position of Intersociety that partisanship and crude soldiering are not only gravely worsening non state actor insecurity in the East, but have also created monstrous state actor insecurity.

In a statement signed by its principal officers, the Intersociety maintained that the Region is also under the siege of security without local contents going by its flooding with over 90% security officers and combatants belonging to Northern Muslim extraction in a Region with over 98% Trado-Christian socio-cultural setting or composition.

“It is also saddening and deeply regrettable that the once secularized and cherished but now ethno-religiously sectionalized and radicalized Nigerian Army is the leading perpetrator in the state actor coercive terrorization of the Region.”

The Nigerian Army is also found to be the leading aider and abettor of the non state actor insecurity including terrorization of the South-East defenseless civilian population and their properties. The Army’s claims of being “professional and ethno-religiously neutral” are loudly laughable and greatest joke of the Year 2022 ending in 30 days from today.

Intersociety has also found the Nigerian Army’s reaction as ‘diversionary’ because of its deliberate but futile attempts to dodge the main issue raised in our statement of Nov 24, 2022-which has to do with genocidal menace of Jihadist Fulani Herdsmen in the East or South East especially the recent jihadist invasion of several communities in Enugu State and lukewarm attitudes of the military especially soldiers and principal officers of the Nigerian Army under 82 Division in Enugu including Cross Rivers State and 6 Division in Port Harcourt including Igbo parts of Delta State under 63 Brigade.

The Army’s reaction also contained clear misrepresentation of facts in that nowhere in our statement of 24th Nov 2022 was it found “Intersociety contesting where the GOC, 82 Division in Enugu was transferred from”.

The Nigerian Army has been brutally fractured and bastardized since July 2015. This is to the extent that it now bears the atrocity conduct attributes of the failed Armies of Libya and Somalia.

Instead of providing public and citizen’s security and safety in the East, especially the South East in line with their constitutional responsibilities and limitations, the Army has turned the Region into killing field and jihad war zone. Historically, the Libyan People’s Army was the component part of “the Armed Forces of the Libyan Arab Jamahiriya” officially founded in 1977 after the “Libyan Great People’s Revolution of Sept 1969” led by Col Muammar Gaddafi.

The Libyan Army, with other military branches, was peopled by 760,000 and one of the highly rated professional, powerful and respected militaries in the world.

However, following Libya’s main civil war of 2011, fueled by clannish and tribal repressive policies and dominations, the Libyan Army fragmented and decimated to the point of being divided into brutish and clannish criminal entities with outlawed practices or prohibited acts as their modus operandi including cannibalism, hate killings, armed robberies, oil crimes, trafficking in persons, abductions and religious, tribal and racial killings as well as  sexual violence of rape and sexual slavery, etc.

In Somalia under Gen Mohamed Said Barre, there used to be “Somali Gendarmerie” (Somali National Army) formed on 12th April 1960.

Due to Barre’s increasing reliance on his own clans with repressive policies leading to Somali rebellions, the Somali National Army and other military branches began to disintegrate in 1988 and fully disintegrated in 1991 into clan warfare entities- engaging in all kinds of prohibited conducts unknown to modern military traditions and practices.

Nigerian Army and other deployed security personnel and their commanders in the East, particularly South-East have been chasing shadows and watching the militarily protected Jihadists in Eastern forests, bushes, farmlands and major road networks and their bypasses slaughtering over 300 and abducting 400 since Jan 2022.

Till date, there are no records anywhere in the Army crimes statistics (if any), showing a single Jihadist Fulani Herdsman or number of Jihadist Fulani Herdsmen or other Jihadists that have been arrested and prosecuted or “gunned down in exchange of gunfire” for slaughtering defenseless citizens of the South-East since January 2022, if not since 2016.

The Nigerian Army’s bogus claims of “being non partisan and professional” are particularly called to question in the 19th-22nd Nov 2022 Eha-Amufu (Enugu) where Jihadist Fulani Herdsmen massacred dozens and abducted dozens of others in three days of jihadist genocidal attacks in three villages of the Community; with soldiers of the Nigerian Army disappearing and nowhere to be seen despite the closeness of the Army formations in the area.

The Army had watched incompetently; and hatefully did nothing to stop dozens of defenseless rural Christians from being slaughtered and abducted and disappeared.

The Nigerian Army and other deployed security agencies and their commanders have collapsed strategic South-East forests, bushes, farmlands and major road networks and their bypasses into the hands of Jihadist Fulani Herdsmen and other Jihadists.

For the first time since May 2015, the Nigerian Military including the Army have become clandestinely religiously partisan and ethnically biased. A typical case in point was a recent account by a survivor of the Jihadist Herdsmen abduction who chillingly disclosed how he, along with three abducted others, were abducted on 20th Oct 2022 along Abia State University, Uturu in Abia State and forced by their Jihadist Fulani Herdsmen abductors to trek for eight days through bush paths in Abia, Anambra, Enugu and Igbo part of Delta States during which they saw dead bodies of abducted Igbo-Christians as they covered the four States.

Hon. John Ifeanyi Eze, a Youth Mobilizer told the media how he, along with three others, was able to identify their abductors numbering nine and wearing military uniforms with Arabic headscarves.

The Jihadist Fulani Herdsmen abduction survivor who regained his freedom with three others after payment of huge ransoms near security checkpoints also disclosed that they saw dead bodies at different stages of decomposition as they forcefully trekked the bush paths around the four Igbo-Christian States.

The testimony above has further exposed the vulnerability of the South-East territory and population in the hands of the Nigerian Army and others.

It is also a shocking disclosure of the high incidence of abductions and captivity killings in the East by Jihadists-with Nigerian Army looking the other side and only interested in innocent and defenseless Easterners to kill and falsely labeled.

Cases of Army/Military’s extrajudicial killings and other brutalities in the East/South-East have risen to an apogee.

Apart from clear lack of modern military expertise including policing and management of nonviolent and violent civil spaces and modern military doctrines of command and control, Nigerian Army of present politico-military dispensation is fundamentally fractured.

As a matter of fact, the Army is nothing to write home about in terms of ethno-religious tolerance in its doctrinal characteristics and command and control.

These have fueled their class criminalization of defenseless citizens using tribal names and religious affiliations which have explained designation of any citizen with “Igbo-Christian name or title” anyway in Nigeria including lately in Katsina State as “IPOB/ESN member/membership” with potential extrajudicial death tag.

The Army has also enlisted Intersociety, a well known and globally respected rights and democracy advocacy organization since 2008 as “IPOB/ESN affiliate or group”; same way Amnesty International had been severally tagged or labeled in connection with its expert reports on military atrocities in the counterinsurgency operations in the North-East.

The bloods of the eight defenseless citizens killed by Nigerian Military (Army and Navy) in Isuofia and Umuona in Aguata, Anambra State are still on their heads.

The innocent spirits of the slain are also seeking for justice. The Nigerian Army and the Navy had on 12th Nov 2022 opened fire and killed no fewer than eight innocent and defenseless citizens.

Their mass killings had taken place in “reprisal” shooting spree aimed at defenseless passersby following an attack about an hour earlier by “Unknown Gunmen” at a Nigerian Naval Checkpoint at Isuofia by Umuona Road Junction Roundabout. Among those shot and killed and labeled “gunned down unknown gunmen” were an innocent citizen running into his compound to escape raining soldiers’ bullets at Isuofia, another defenseless citizen that ran into the compound of a widow at Umuona, who was dragged out and shot dead.

As if that was not enough, a Venza Car with shattered windscreen, later displayed by the Army as “belonging to the gunned down Unknown Gunmen” was later found to belong to a Lagos based businessman returning with some hired laborers from Lagos State for purpose of painting his new house.

The car owner and those with him were shot from behind by military machine guns and the occupants slain. The Army, despite opening the car doors and seeing buckets of paints and painting materials, still went ahead and paraded them as “among the gunned down unknown gunmen”.

This is even when the “unknown gunmen” that attacked and killed a naval personnel had escaped less than ten minutes after that attack uncaught into Aguluzigbo from Umuona-Aguluzigbo Bypass.

Police AIGs for Zone 6 Calabar, Zone 13 Awka, Zone 5 Benin and Zone 9 Umuahia as well as  Commissioners  of Police for Abia, Enugu, Delta, Imo, Ebonyi, Cross River, Akwa Ibom and Edo States must also leave. In their places must be replaced with 60% senior police and military officers from the East and 20% others who must be non Eastern Christians. Only 20% Muslims should be allowed to be posted to the East henceforth.

For: International Society for Civil Liberties and Rule of Law (Intersociety);

Emeka Umeagbalasi, Criminologist/Researcher and Board Chairman;