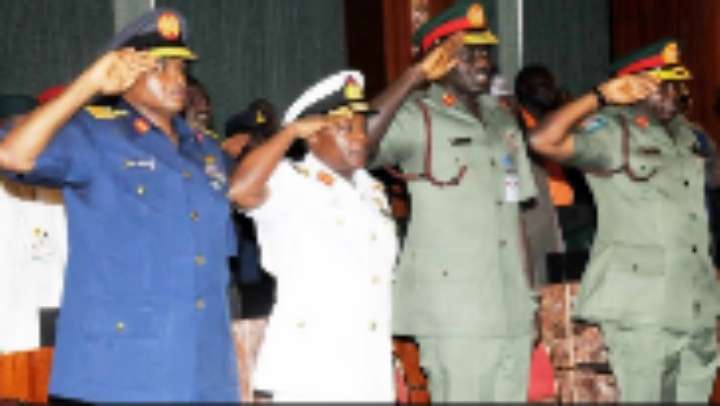 The International Society For Civil Liberties & The Rule Of Law (InterSociety) has fingered five security Chiefs whom the body has identified as having a case to answer in the recent killing of unarmed members of the Indigenous People of Biafra (IPOB) in Emene area of Enugu in Enugu State.

Calling for their sack, the InterSociety for Cin a statement on Thursday told the Federal Government of Nigeria through Secretary to the Government of the Federation, Boss Gidahyelda Mustapha, Esq. and Chairman of the Police Service Commission, Retired IGP Musiliu Smith to “promptly, thoroughly, independently, impartially and conclusively” investigate and dismiss or recommend for dismissal from the Nigerian Army, the Nigerian Navy, the Nigeria Police Force and Nigeria’s State Security Service of the five complicit senior security officers.

In the statement emailed to The Street Reporters Newspaper, the group said the officers were indicted in their special report on Emene massacre of Sunday, August 23, 2020 which was released on Sunday, 13th Sept 2020.

Remaining text of their statement on the massacre and the identified officers reads:

The named complicit officers were not only directly or vicariously involved in the massacre, but also gravely abused their offices and powers and acted abusively, crudely, hatefully and murderously.

ALSO READ  Soludo To Obi: Why You Cannot Win

While the Police Service Commission was called upon to act based on powers vested on it by the PSC Act of 2001 and the 1999 Constitution by investigating and dismissing the duo of AIG Danmallam Mohammed and CP Ahmad Abdurrahman, the SGF, on his part, was asked to exercise his investigative and enquiry powers provided in the Constitution by constituting a probe team to investigate the roles and involvements of the trio of GOC Adegboye, AOC Idi Amin and Director Obande and issuing far reaching recommendations to the Nigerian Army Council, the Nigerian Air Force Council and authorities of the SSS (DSS) including dismissal of the named three senior security officers.

Our letters to SGF and PSC were delivered to them by our lawyers on Friday, 18th Sept 2020, same day they were dated and were duly received by the desk officers at the offices of the SGF and the PSC with acknowledgment copies duly signed and stamped for our lawyers.

We had also on the same date, (18th Sept 2020) submitted two letters to the United Nations and leaders of western democracies, drawing their attentions to the special report and praying that they should internationally blacklist or declare the named indicted security chiefs as international personae non gratae.

Recipients include United Nations’ Special Rapportuer on Extrajudicial, Summary or Arbitrary Executions, Dr Agnes Callamard, US Secretary of State, Mike Pompeo, US Ambassador to Nigeria, Ms Mary Beth Leonard, Chair and Co-Chair of the All Party (UK) Parliamentary Group for Int’l Freedom of Religion or Belief, Jim Shannon, MP and Baroness Caroline Cox, the UK High Commissioner to Nigeria and High Commissioners of Canada and Australia as well as Ambassadors of Norway, Ireland, Switzerland and Brazil. It was referenced: Intersociety/NG/.02/9/20/int’l/Governments

The two international letters further prayed their highly respected recipients to ‘take into critical account the horrible human rights records and profiles of the five named senior Nigerian security officers’ and ensure that ‘weapons and humanitarian and development aids secured in the west are not used to massacre defenseless and innocent citizens in Nigeria particularly on the grounds of their Religious Belief, or Ethnicity and Class’.

Summary Of The Massacre:

The Emene massacre under reference was vicariously/and or directly perpetrated by armed personnel of the Nigeria Police Force, Enugu State Command under Commissioner of Police, Ahmad Abdurrahman and the Police Zone 13, Anambra State, under Assistant Inspector General of Police, Danmallam Mohammed. The massacre was originated in the early morning of same day by the personnel of the Enugu State Directorate of the State Security Service headed then by Director Obande Olotu, an Idoma-Benue born. Vicariously and directly involved in the massacre, too, were armed personnel of the 82 Div of the Nigerian Army, Enugu headed by its General Officer Commanding, Major Gen Lasisi Adegboye and the Nigerian Air Force Base, Enugu, headed by its Air Officer Commanding, Ground Training Command, Air Vice Marshal Idi Amin.

In our ten-page report,released on 13th Sept 2020, we investigated and found that no fewer than 30 defenseless citizens, comprising Judeo-Christian worshippers and sports activists were massacred at the Emene Community High School and its environs.

Over 40 others were shot at close range and terminally injured while not less than 60 were arrested and detained. Church services of that fateful day (Sunday, 23rd August 2020) including those of St Joseph Catholic Parish and Pentecostals were violently disrupted and abruptly dismissed.

Some defenseless citizens shot and wounded who ran inside St Joseph Catholic Parish were chased after and arrested inside the Church amidst blood droppings.

As we write, crackdowns by soldiers, SSS and Police crack squads have intensified leading to indiscriminate arrests, breaking of homes, torture and other inhuman and degrading treatments. The whereabouts of bodies of shot and killed defenseless citizens and those shot and terminally injured who were taken away by soldiers, Air Force, Police and SSS personnel have remained unknown till date.

On the other hand, two personnel of the SSS (State Security Service) who originated the attack and massacre were seized and clubbed to death by provoked and angered mobs. The full report is here: http://intersociety-ng.org/component/k2/item/566-2020-09-15-11-16-12

He Was Stopped By Soldiers On The Day Of The Massacre (23rdAugust 2020) On His Way To Worship At St Joseph’s Catholic Church, Emene And Shot.

He Is Seen Here Chained Since 26th August 2020 By Police At The National Orthopedic Hospital, Emene (Enugu).